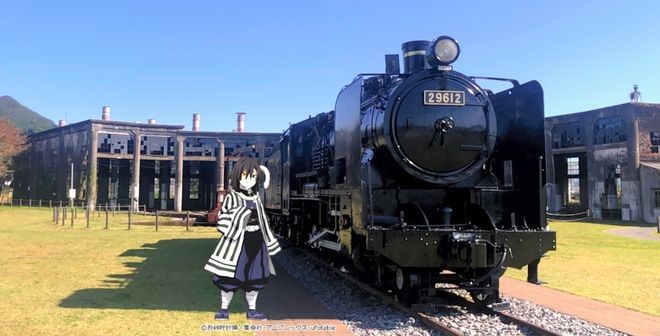 Obanai Iguro appears on a smartphone screen at JR Bungomori Station in Kusu, Oita Prefecture, with the help of an augmented-reality app. He remains on the screen even when the app user goes to the Bungo-Mori Roundhouse Koen park about 300 meters from the station building to take pictures against the backdrop of the locomotive and the old roundhouse. (Satoshi Juyanagi)

HITA, Oita Prefecture--"Demon Slayer" fans are hitting the rails to collect all the digital stamps in a game based on the manga series at train stations in the Kyushu region.

JR Kyushu is taking advantage of the popularity of the animated feature film adaptation of "Demon Slayer: Kimetsu no Yaiba," which has taken Japan by storm. Fans are collecting the stamps and sharing their posts on social networking websites.

To collect digital stamps at 13 stations across the region, participants need to register for JR Kyushu's online membership and install an exclusive augmented-reality (AR) app on their smartphones to "check in" at the stations.

There are also "AR photo spots" at the stations where they can take pictures and videos with manga characters on the screen.

The stations are scattered around the Kyushu region from Mojiko Station in Kita-Kyushu, where the manga protagonist Tanjiro Kamado appears, to Ibusuki Station in Ibusuki, Kagoshima Prefecture.

Participants who visit all the stations are eligible for a lottery to claim Sugoca prepaid IC cards featuring manga characters and a "Demon Slayer"-themed train currently operated in the region. The special train also appears on the screen while the passengers are on board.

According to JR Kyushu, popular characters are scattered in all the seven prefectures to encourage participants to sweep across the region. Although it is hard to visit all the 13 stations, a representative said, "You can use a two-day ticket for unlimited rides."

In Oita Prefecture, participants can get digital stamps of the characters at three stations: Nezuko Kamado, the heroine, at Hita Station; Obanai Iguro, the Serpent Hashira, at Bungomori Station; and Inosuke Hashibira at Beppu Station.

To take pictures with the characters, participants need to follow instructions on a poster at each station and install an AR app called "COCOAR2." They can move around and take photos at any spot of their choosing while the character is seen on the screen.

Both the stamp collecting game and the AR photo spots are offered until Dec. 28.