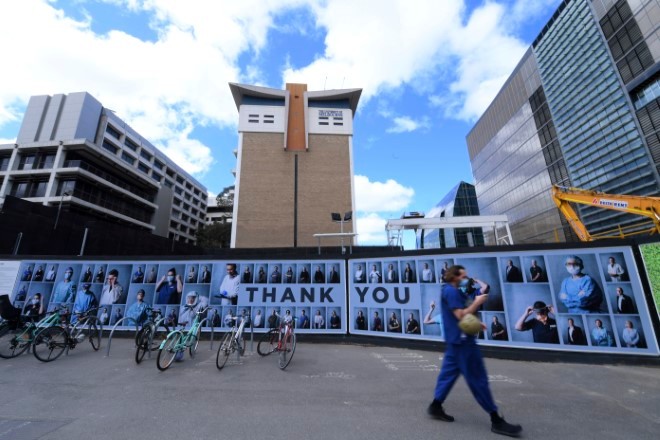 A man wearing a face mask walks past an outdoor photography exhibition of healthcare workers in Melbourne on Sept. 22. (AP Photo)

SYDNEY--Australia says it is closely monitoring trade flows to China amid “deeply troubling” reports from industry that Chinese buyers have been told not to purchase seven categories of Australian produce from Friday.

Australian and Chinese media have reported that Chinese importers had been informally warned by Chinese customs officials that Australian wine, copper, barley, coal, sugar, timber and lobster will be targeted for increased inspections from Nov. 6.

Australia’s trade minister Simon Birmingham said Chinese official government statements had denied any coordinated effort was being taken against Australia, and he hoped Beijing “is true to its word”.

“They deny any discriminatory actions that are being taken. But that doesn’t seem to be what industry is seeing and hearing at present,” he said on radio station 5AA.

Diplomatic relations between Australia and its largest trading partner have become strained after Beijing was angered by Australia’s call for an international inquiry into the source of the coronavirus, and Australian police raids connected to foreign interference investigations.

On Thursday, a Chinese foreign ministry spokesman told a media briefing in Beijing that Chinese measures on foreign imports were in line with Chinese law and international custom practices.

Australia “can do more” to bring the bilateral relationship “back to the right track”, he added.

Australian companies stopped sending rock lobster to China this week after new customs inspections were imposed on the live seafood, resulting in lobsters dying before they could reach customers. China also halted some imports of timber and banned barley shipments from an Australian-based grain exporter.

Birmingham said the “risk profile has changed dramatically” for Australian businesses exporting to China this year.

“The range and extent of concerns that industry are hearing is deeply troubling,” he said.

“The constant stream, it seems, of concerning, troubling administrative or other decisions being taken in China, heightens the risk for Australian businesses.”

Australian ministers told media on Friday the Australian government had sought to open new markets for Australian exporters, in Indonesia and India, and was negotiating free trade deals with Britain and the EU.

Australia joined the United States, India and Japan for the three-way Malabar naval exercise on Thursday, the first time Australia has participated since 2007.

China has previously expressed disapproval of Australia’s participation in the Malabar Exercise.

In another development likely to raise diplomatic tensions, the first person charged under Australia’s foreign interference laws, introduced in 2018 amid allegations of Chinese interference in Australian politics, faced court on Thursday.