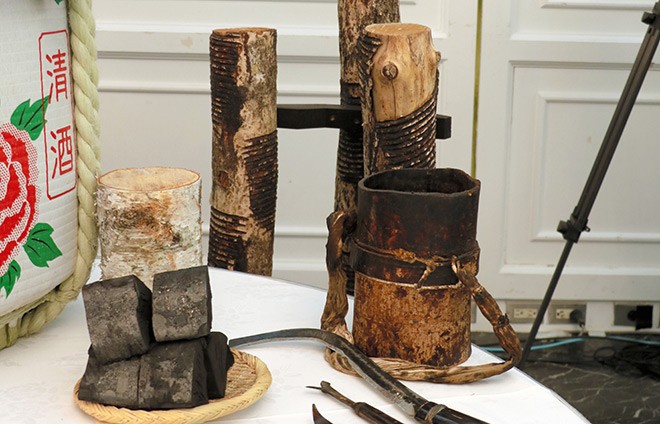 Lacquer bark from Ninohe, back, will be used to add flavor to gin, while charcoal made from the white birch grown on the Hiraniwa Plateau in Kuji, left, will filter vodka. (Mitomu Narita)

MORIOKA—A sake brewery will use pandemic-related issues to create gin and vodka with distinctively local characteristics.

Nanbu Bijin Co., based in Ninohe in Iwate Prefecture, said it will produce the spirits with its excess supply of sake rice under a technique it deployed to create rubbing alcohol to prevent the spread of the novel coronavirus.

The bark of the lacquer tree, a local specialty here, will add flavor to the gin, while charcoal made from white birch trees from Kuji in the northern prefecture will filter the vodka.

Kosuke Kuji, the 48-year-old president of the brewery, announced the project at an Oct. 6 news conference.

“It is meaningful to use local products,” the brewer said. “We want both our gin and vodka to be full of taste.”

Although Nanbu Bijin has been exporting its sake overseas, demand for its products has decreased at restaurants, liquor shops and elsewhere during the pandemic.

It expects sake sales to plummet by about 15 percent this year, leaving the company with excess sake rice harvested by contract farmers in or around the city.

Nanbu Bijin will begin production of gin and vodka mainly from the unused sake rice in January and start sales by March.

The company intends to offer the spirits either in 720- or 750-milliliter bottles, with 10,000 bottles produced for each beverage annually.

About 70 percent of domestic lacquer is produced in Ninohe.

“We are very pleased that the company is using Joboji Urushi lacquer (from Ninohe) and promoting gin produced in the northern part of Iwate Prefecture to make a foray into the world,” Ninohe Mayor Jun Fujiwara said.

The charcoal used will come from white birch trees grown on the Hiraniwa Plateau in Kuji.

“We want to fully support the production,” Kuji Mayor Joji Endo said. “We hope the vodka production raises the profile of the white birch in Kuji.”