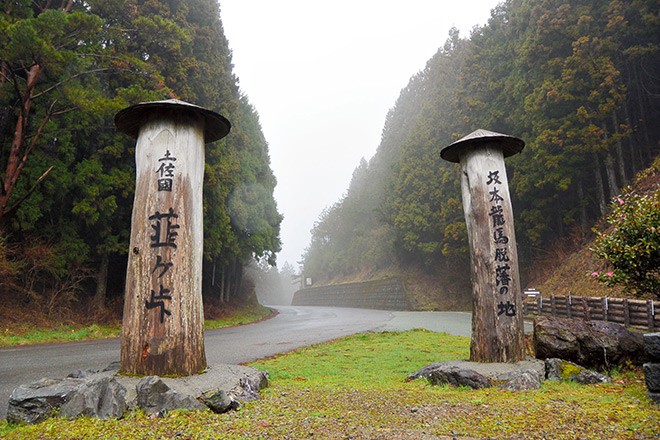 Markers stand on a hill to commemorate the place that Sakamoto Ryoma traveled through when he left the Tosa domain in present-day Kochi Prefecture during the Edo Period. (Asahi Shimbun file photo)

During the Edo Period (1603-1867), breaking away arbitrarily from the “han” (feudal domain) to which one belonged, called “dappan,” was a crime.

Ryotaro Shiba’s novel “Ryoma ga Yuku” (Ryoma Goes His Way) depicts a scene where the eponymous protagonist, Sakamoto Ryoma (1836-1867), is about to commit that crime, and his older sister warns, “Once you leave, you will never be allowed to set foot in this domain again.”

She tries to remind him that not only would he never see his kin again, but his dappan would also get all remaining members of his clan into dire trouble.

In the world of Japanese professional baseball, a rule that could be considered every bit a throwback to that feudal system existed until a while ago.

Let’s say a promising amateur ballplayer bypassed a Japanese professional baseball team and signed with an overseas club. Even if he later decides to come back to Japan to play, he would not be drafted for two to three years.

That blank would hurt his career. I would say the rule effectively served as blackmail for any young ballplayer eager to first try his luck in the major leagues.

The Tazawa Rule, as it was called after the name of a pitcher who signed with a U.S. club 12 years ago, was eventually abolished in September.

The Japan Fair Trade Commission, which was looking into this arrangement, apparently wanted to have the last word.

The commission issued an official statement to the effect that the rule constituted a possible violation of the Anti-Monopoly Law.

Just imagine the uproar that would ensue if Keidanren (Japan Business Federation) were to prescribe punishment to anyone, fresh out of university, who lands a job overseas without first looking for employment in Japan.

The days are long gone when unfair rules prevailed in sports because athletes were thought to belong in a “special world.”

I wonder if Japanese baseball did away with the rule because the top honchos realized it was anachronistic or simply because they didn’t want to get on the wrong side of the anti-monopoly watchdog.

Back to dappan. It appears that the severity of punishment for offenders varied from one domain to another.

While the Tosa domain, to which Ryoma belonged, dealt with them harshly, there were domains where dappan was effectively overlooked, according to the book “Ryoma-shi” (Ryoma chronicles) by Michifumi Isoda.

There may have been some feudal lords who didn’t think it was a bad idea to let their subjects experience the outside word.