Refusal to answer questions in Diet soared in Abe government 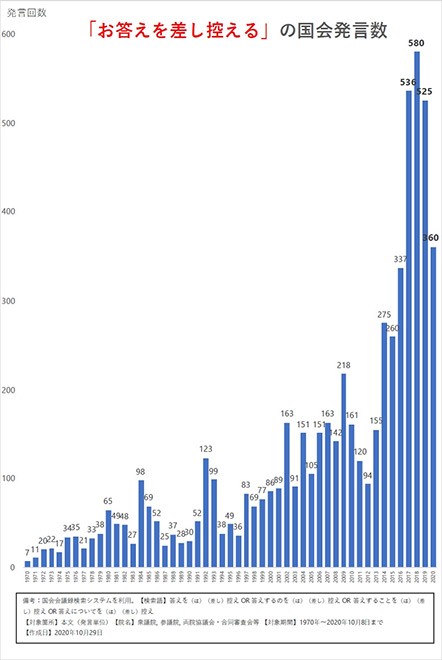 A graphic created by Keita Sakurai, an associate professor of social welfare at Ritsumeikan University, shows that lawmakers’ refusal to answer questions shot up during the Abe administration. (Provided by Keita Sakurai)

The long-lasting Abe administration set another record: the most “no comments” uttered in the Diet.

Keita Sakurai, an associate professor of social welfare at Ritsumeikan University, was disturbed by the trend of Cabinet members and government bureaucrats refusing to answer tough questions from opposition lawmakers in recent years.

So he went to the trouble of counting exactly how many times the phrase, “I want to refrain from replying,” was used in the Diet.

The expression was uttered more than 300 times annually during the final five years of the Abe administration, by far more than any other administration. In particular, the count topped 500 a year between 2017 and 2019, according to Sakurai.

He posted his findings in an Oct. 29 tweet with a graphic showing the frequency of the expression used during Diet sessions from 1970 to 2020. The graphic was titled, “A nation that would not answer even when questions are asked.”

“I have been wondering when the Diet turned into a place where legislators and bureaucrats are allowed to give no answers, so I produced the graphic,” he said. “The trend of the past few years is abnormal.”

Sakurai used the free public system to search the records of Diet proceedings. The database keeps all digitized data on remarks by lawmakers and bureaucrats at plenary sessions and committee meetings dating from the first postwar Diet session in May 1947.

Sakurai was familiar with the system because he had previously used it for research in his field. It took him only half a day to tally the count.

Prime Minister Shinzo Abe used the expression on 165 occasions, the most in his Cabinet, when he set a longevity record in office from Dec. 26, 2012, to Sept. 16 this year.

He was followed by Masako Mori, former justice minister, who declined to answer questions in the Diet on 94 occasions, Tomomi Inada, former defense minister, at 87 times, and Taro Kono, former foreign minister, on 78 occasions.

Sakurai believes the unprecedented nonresponse trend stems from a raft of scandals involving the Abe administration. Opposition lawmakers peppered Abe with questions about suspected favorable treatment to the Moritomo Gakuen school operator, the Kake Educational Institution and his supporters at the taxpayer-funded cherry blossom viewing gatherings.

But Sakurai added that his research showed that Cabinet members and government bureaucrats snubbed questions in all policy issues, not just the subjects related to the scandals.

“It was contrary to my expectations,” he said. “I believe that a growing number of politicians and bureaucrats have begun picking up the habit of refusing to answer questions since the Abe administration was formed. It amounts to disrespect for people, rather than the Diet.”
Sakurai fears that such an attitude has been spilling into society.

His research did not cover Yoshihide Suga as prime minister.

But Sakurai said Suga has already demonstrated a potential for clamming up. As prime minister, Suga said, “I want to refrain from replying,” during the first question and answer session with heads of opposition parties late last month.

“I am closely watching how Suga will behave,” Sakurai said.