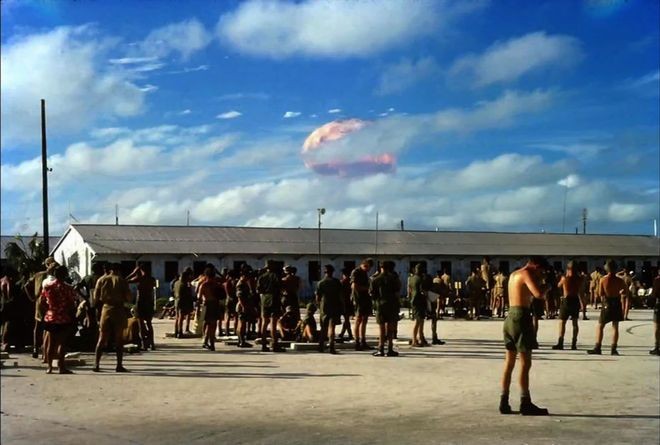 A photo of a nuclear test taken by a former soldier and video footage of a Japanese fishing boat were also shown as part of the TV program, which attempted to unravel the total picture of the negative consequences of the nuclear tests on the health of the sea, marine life, soldiers and fishermen alike.

After shedding light on the suffering of victims exposed to nuclear tests conducted decades ago in the Pacific Ocean to domestic audiences, Hideaki Ito is intent on taking his message overseas.

Ito, 60, the program director for Matsuyama-based Nankai Broadcasting Co. in Ehime Prefecture, is planning to make a new movie on the nuclear tests, with the eventual goal of showing his film in the United States.

The nuclear tests were repeatedly conducted by the United States and other nations between 1946 and 1962 above Pacific tuna fishing grounds.

“The issue could perhaps never be brought to a resolution unless people are told about this fact in a nuclear weapons superpower,” he said. “I hope to set off a movement by letting Americans know that radioactive substances were falling on them.”

Ito plans to make the movie based on in-depth research, including soil tests to be conducted in the United States. He hopes to have the film screened across the country and speak to U.S. audiences in person.

Ito is raising funding on a crowdfunding platform for his project, which he has titled “Fallout?” He said he has set a target of raising 10 million yen ($96,700) by Dec. 25 and having his flick completed next summer.

It will be the third in a series of related films on the issue.

“I am responsible for the sufferers I have interviewed,” Ito said. “And the issue is not unrelated to the Fukushima nuclear disaster (of 2011). I cannot just stop working on this project.”

Ito has been working on educating the public about the nuclear testing for 17 years. He has been making TV programs and movies on the issue, including a 2012 movie titled “X years after exposure to radiation,” in promoting public awareness of the problem.

Ito first learned about the nuclear tests in the Pacific in 2004.

He has since collected testimonies by former crew members of tuna fishing boats and their bereaved family members. Seventeen of his TV programs on the issue have been aired.

Ito adapted his works into films in 2012 and 2015. He has visited different areas of Japan to talk to the audiences in person following the screening of his films.

Ito interviewed experts, researchers and journalists in the United States when he had his latest film screened in the country three years ago. All said in response that they didn’t know about the facts depicted in the movie and were surprised to learn about them.

Around that time, Ito was feeling impatient because his steady and persevering efforts in Japan had seldom led to a groundswell of opinion that was enough to change the reality on nuclear issues.

Ito’s next movie will be based on “Christmas song: X years after exposure to radiation,” a program that was aired on TV across Japan in May this year. The program explored the consequences of nuclear tests conducted on and around Christmas Island close to the equator.

The program features interviews with former British “atomic soldiers,” or servicemen who took part in the tests, and with Japanese fishermen who continued catching tuna in surrounding waters.

Some of the former soldiers, who were in their teens to 20s at the time, told Ito, for example, that the "biggest bang I've heard in my life hit us" and that they were given "no protective clothing, no warning that it would be a problem."

Ito also learned that many of the former soldiers contracted cancer or died before they turned 50.

Photos of a nuclear test taken by a former soldier and a video footage of a Japanese fishing boat were also shown as part of the TV program, which attempted to unravel the total picture of the negative consequences of the nuclear tests on the health of the sea, marine life, soldiers and fishermen alike.