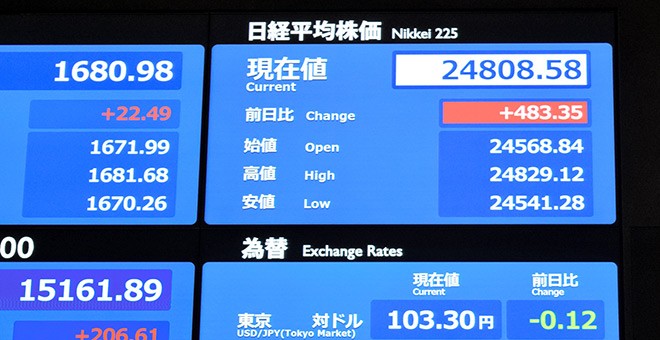 Japan’s markets and business leaders are showing relief at the sight of Joe Biden’s U.S. presidential election victory, which ended a period of political uncertainty that stretched for days.

And the business community appears to be pinning its hopes on the new U.S. administration mending fences and restoring a sense of normalcy to international relations.

The Nikkei 225 index surged on Nov. 9, with its one-day gain temporarily 600 points higher than at the close late last week.

One analyst said the market’s response reflects “tangible hopes for the new Biden administration’s economic and other policies.”

Many world leaders have now congratulated Biden as the country’s political outlook stabilizes.

Three major business organizations released statements addressing the outcome of the U.S. election and laid out priority areas they hope to see addressed by a Biden White House.

“Many Americans supported his promise to build an inclusive economy with consideration for the vulnerable members of society,” Nakanishi said in a statement about Biden’s victory.

Akio Mimura, who heads the Japan Chamber of Commerce and Industry and is an honorary chair of Nippon Steel Corp., said in a statement that voters approved Biden’s plans to “search for financial resources to handle the novel coronavirus pandemic, expand social welfare and secure an enhanced structure for climate change and energy policies.”

Mimura said he hopes Biden will work to “mend relationships with major countries by cooperating with international organizations, rejoining the Paris Agreement, and maintaining cooperation over the free and open Indo-Pacific strategy, among other issues.”

Kengo Sakurada, the head of the Japan Association of Corporate Executives and also president of Sompo Holdings Inc., said in a statement that the election exposed a number of “deeply rooted problems all at once,” such as “division within the United States” and attempts at “undermining confidence in the institutions of democracy.”

Sakurada pointed to key policy issues that need to be dealt with cooperatively, including climate change and implementing the free and open Indo-Pacific strategy.

“It is important for (Prime Minister Yoshihide Suga and Biden) to work to further strengthen bilateral relations,” he said.

(This article was compiled from reports by Junki Watanabe and Kazuhito Suwa.)