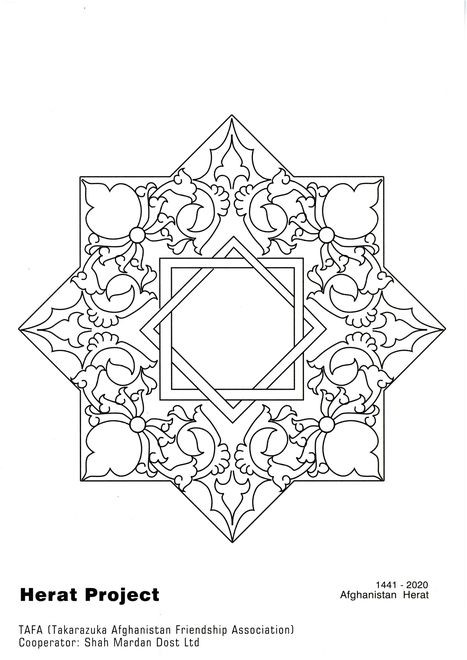 TAKARAZUKA, Hyogo Prefecture--Continuing instability in war-torn Afghanistan and advanced age are all that is stopping 85-year-old local resident Keiko Nishigaki from returning to the landlocked country to empower financially struggling women there.

In 1994, Nishigaki established the Takarazuka Afghanistan Friendship Association, a nongovernmental group dedicated to providing support to the West Asian nation, and has spent more than 25 years seeking ways to help women in Afghanistan.

But it was only recently that she came up with a new approach to bridge a gap between cultures and provide much-needed employment opportunities: coloring pictures.

She was driven by the realization that countless female university graduates don’t get the chance to use what they learned because of family responsibilities. Her goal is to give them a chance to gain confidence and flex their skills.

“I want Afghan women to know that they can earn money with their talents and take the first step into (being part of) society,” Nishigaki said.

Her many years of association with Afghanistan started when she first visited the country in 1994 after she raised funds in Japan to buy powdered milk for infants at a refugee camp where families sought shelter from intensifying conflict.

Since then, she has traveled back almost every year.

Nishigaki started by helping to run secret classes for girls in the backyards of private homes and ensured salaries were paid to the female teachers who lost their jobs after the Taliban prohibited female education and employment.

Nishigaki initially worked with Afghan women and children in Jalalabad, eastern Afghanistan, but the worsening security situation there forced her to move her project in 2011 to Herat in western Afghanistan close to the border with Iran.

In Herat, she came across miniature drawings done in a traditional style and was immediately attracted to their beauty. She was also struck by the enthusiasm and passion of a Herat University professor and the students who keep the traditional art alive.

Nishigaki made friends with them and spent three years translating the professor’s Persian thesis on the history of the drawings into Japanese. She then published it in book form to share the beautiful art with Japan and then donated the proceeds.

But as the Taliban and the Islamic State extended their grip over wider areas of Afghanistan, the security situation became even more untenable.

She could no longer enter the country after her last visit in June 2016 and, for a few years, had to stop providing support to locals. She finally managed to resume her activities last year.

“Afghanistan occupies 80 percent of my mind and I felt compelled (to do something),” she said.

Stuck in Japan, Nishigaki stays in touch with Afghans, including female artists, on social media.

In those conversations, she introduced the idea of taking advantage of a growing trend in Japan by selling their art in the form of coloring pictures.

“What’s coloring?” asked one woman. “Who’s going to buy that?”

Nishigaki methodically answered each of the women’s questions to convince them to join the project.

She asked them to take photos of their designs with their smartphones and send them to her. She printed out the images in Japan, traced the outlines and then printed them on high-quality paper to make line-art drawings for coloring.

The artworks produced in the new project were designed by nine women in their 20s who learned the drawing techniques at the Faculty of Fine Arts of Herat University.

Their intricate line-art drawings are themed on plant patterns, the kind of miniature drawings often seen on walls and in the Koran.

Nishigaki made 1,000 sets of the line drawings and put each set in a clear plastic holder. The holder designs feature some of the miniatures drawn and painted by the university professor and others as an example of how to color in the pictures.

Nishigaki hopes to someday hold an exhibition of their original miniature drawings in Japan.