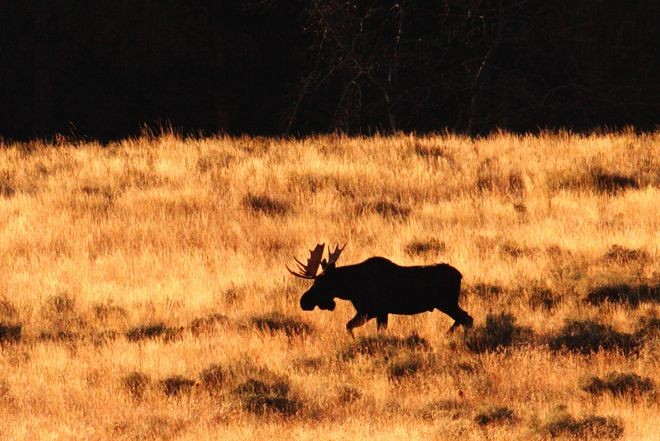 A moose walks across a grassy plain in Yellowstone National Park on Sept. 19, 2005. (Hiroyuki Kobayashi)

An intriguing photo shows the skeletons of two moose that died with their antlers entwined. The animals must have locked horns so fiercely--quite literally--that they could not disentangle themselves before death.

The photo by celebrated nature photographer Michio Hoshino, who died 24 years ago, became the inspiration for a children's picture storybook published this past autumn.

Titled "Aru Herajika no Monogatari" (The story of a moose), it is the work of author-illustrator Mamoru Suzuki, 68, whom I visited in Izu, Shizuoka Prefecture.

"I'd seen this photo many years ago, and I dreamed about it one midnight last summer," said Suzuki, who was close family friends with Hoshino until his death in 1996.

Leaping out of bed, Suzuki furiously made pencil sketches and completed a draft by morning.

Two months later, he flew to Alaska, where the photo had been shot. With a book of Hoshino's essays as his guide, Suzuki roamed the land and sketched Alaskan wildlife. The frigid air stung his skin, and he marveled at how in the blink of an eye a vast stretch of wilderness could be blanketed by snow.

In his storybook, two exhausted moose are eaten alive by brown bears and coyotes.

"I didn't want my book to terrify small children," he noted. "But I also wanted to depict the reality of how the flesh of live animals becomes the meat and bones of other animals."

He had to redraw his pictures over and over, wondering if they were too graphic or whether he'd drawn too much snow to conceal the blood and gore.

Come to think of it, the cycle of life was Hoshino's lifelong theme.

Hoshino once described a scene where he ate a moose: "The moose's body is slowly being assimilated into mine. At that moment, I become a moose, and the moose becomes a human."

And the photographer reflected, "The living and the dead. The organic and the non-organic. Where does the boundary lie?"

Near the end of Suzuki's book, a rabbit gnaws a moose bone. The narrative goes, "Minus 50 degrees. Alaska's quiet and severe winter."

I imagined the passing on of life unfolding in Alaska as winter approaches.