EDITORIAL: Succession in imperial family continues to be a source of concern 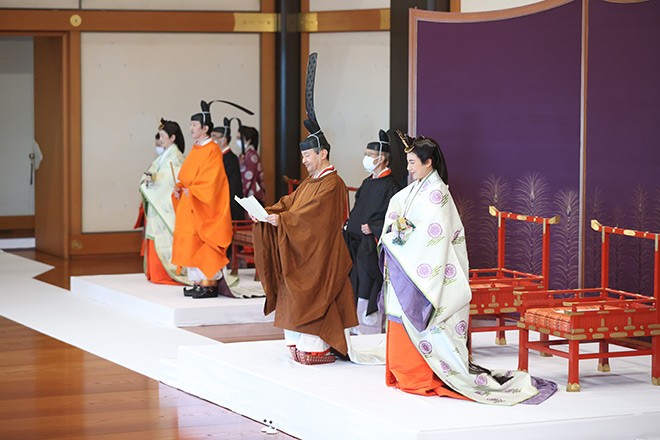 Emperor Naruhito, second from right, delivers an address during the ceremony for the proclamation of his brother as crown prince at the Imperial Palace on Nov. 8. (Pool)

Editorials in The Asahi Shimbun have repeatedly urged the government to act swiftly to initiate open debate on a wide range of issues concerning imperial succession and activities of the imperial family.

When the Diet in 2017 enacted a special law to allow then Emperor Akihito to abdicate and pass the throne to his eldest male heir, then Crown Prince Naruhito, now Emperor Naruhito, in a supplementary resolution it called on the government to tackle issues related to “securing stable imperial succession.”

These included the proposal to allow female members of the imperial family to start a new branch of the family, or “miyake.”

The resolution urged the government to consider such issues and report its responses and decisions to the Diet “promptly after the law comes into force.”

After the special law came into effect in spring last year, however, the administration of former Prime Minister Shinzo Abe decided to put off debating related issues until after the Rikkoshi-no-rei, wasting precious time. The delay reflects the Abe administration’s lack of respect for the Diet.

The government says the departments in charge have been interviewing experts on these issues. If so, it should publish information about these interviews and explain the current state of discussions within the government.

There are only seven members of the imperial family younger than 40 and six of them are women, with Prince Hisahito, 14, the crown prince’s son and second in line to the throne, being the only male.

Under the current law, female members of the imperial family lose their royal status when they get married.

The system has long been a source of concern about the future of imperial succession.

Prime Minister Yoshihide Suga stresses the “historical importance of the fact that male-line succession has continued.” But polls have shown that a majority of the Japanese people support allowing female members of the imperial family and their descendants to ascend to the throne.

There should be no situation that causes a serious rift among the public over an issue concerning the symbol of the unity of the people.

Any reform of the system that would lead to a change in the order of succession is probably unrealistic. But the government can no longer continue procrastinating on resolving the question of what kind of measures should be taken to secure the future of the imperial family.

Uncertainty over imperial succession is not the only problem caused by a continued shrinkage of the imperial family. It will also become increasingly difficult for the family to maintain the current levels of public activities and contacts with the people.

In one response to the challenges, the administration of Prime Minister Yoshihiko Noda of the former Democratic Party of Japan proposed plans in 2012 to institutionalize female-headed miyake.

The proposal would have allowed female members of the imperial family to retain their royal status after marriage and head an independent household.

But many related issues have yet to be worked out, including the statuses of their spouses and children, whether the woman’s consent should be required for the step and the scope of female imperial family members who are eligible.

The Noda administration’s plans also included a proposal of allowing female members of the family to engage in various imperial activities as special government employees after they lost their royal status following marriage.

The question now confronting the Suga administration is how it will find answers to all the questions that have been left unaddressed for far too long and until when. Suga, who served as the chief Cabinet secretary of the Abe administration, is responsible for the deepening of the succession crisis.

This year, the new coronavirus pandemic has forced the cancellations of many events to provide opportunities for the imperial family to have direct contact and communication with citizens.

The emperor and the empress were unable to visit areas in and around Kumamoto Prefecture that were struck by the disastrous torrential rain this summer to express sympathy for people affected.

With no end to the pandemic in sight, it is a major policy challenge how to develop and stabilize the relationship between the imperial family and the public. There is a long list of related issues the government needs to consider and discuss.