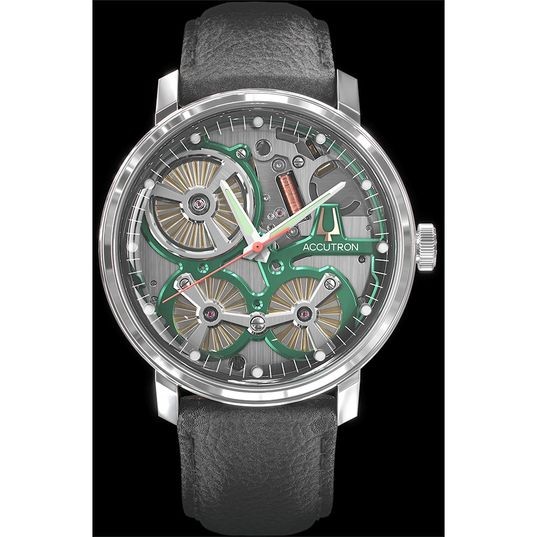 The Accutron Spaceview 2020 watch can generate power and show the time based on static electricity. (Provided by Citizen Watch Co.)

Time is money for Citizen Watch Co. amid slumping sales during the coronavirus pandemic, so it's looking to harness a new power source to jump-start sales: static electricity.

The company's next-generation Accutron Spaceview 2020 watch will go on sale in clock shops and elsewhere in Japan under the U.S.-based, Citizen-affiliated Bulova brand on Nov. 27. It has already arrived in the U.S. market.

The product, featuring the new technology that took 10 years for development, is characterized by its smooth-moving second hand unlike its quartz counterpart, according to Citizen representatives.

The Accutron is equipped with the electrostatic drive system, which uses electric power produced from static electricity to operate the second hand with an electrostatic motor. The minute and hour hands are moved by a conventional stepper motor used in quartz watches.

The system has two turbines that generate electricity through a phenomenon known as electrostatic induction. Under the mechanism, when charged objects, called electrified bodies, are placed near metals or other electrically conductive materials, known as conductors, electrons move in the conductors, generating electric currents.

The power-generating turbine is comprised of a special thin disk charged with static in a radial manner that is put between a pair of electrically conductive electrodes.

When the watch is shaken, the disk rotates to the motions of a weight on the back of the movement, stimulating electrons in the electrodes to make power. The disk is designed to revolve at high speeds, according to Citizen.

Only a tiny amount of power can be, however, produced from static electricity, so the Accutron’s second hand will stop to save power when the wearer fails to swing the arm for some five minutes.

To the delight of hardcore watch fans, the Accutron’s see-through cover allows owners to observe its inner mechanism. The power-producing turbines can be seen below five and seven o'clock in the dial plate, and the electrostatic motor is arranged below 10 o’clock.

Conventional clock hands are controlled in two different ways. Quartz watches take advantage of electricity-induced crystal oscillations to show the time, whereas the mechanical ones run on springs.

Since the electrostatic induction model uses a differing technique from both of them, it can be called the “next-generation” timepiece.

Although the quartz watch applies electricity instantaneously per second for its second hand to tick-tock every second, the electrostatic motor can move the second hand smoothly like a mechanical one.

In the global clock market, smart watches by Apple Inc. and other manufacturers have become increasingly dominant.

The high-tech devices are not only available for reasonable prices from thousands of yen to tens of thousands of yen, but also boast various functions. They can monitor users’ health by measuring their heart rate and number of steps, while emails can also be sent and messages posted on social media via smartphones.

The market for quartz time pieces in the same price range has been shrinking, and the situation has worsened because of the new coronavirus outbreak.

Struggling to deal with flagging sales, Citizen in October solicited voluntary retirements to discharge 550 employees at its manufacturing subsidiary.

As models with expensive prices such as several hundreds of thousands of yen or more have reportedly been still enjoying strong sales, Citizen is looking to pitch the static-running product with the new “driving force” to watch fans so as to enhance its brand image.