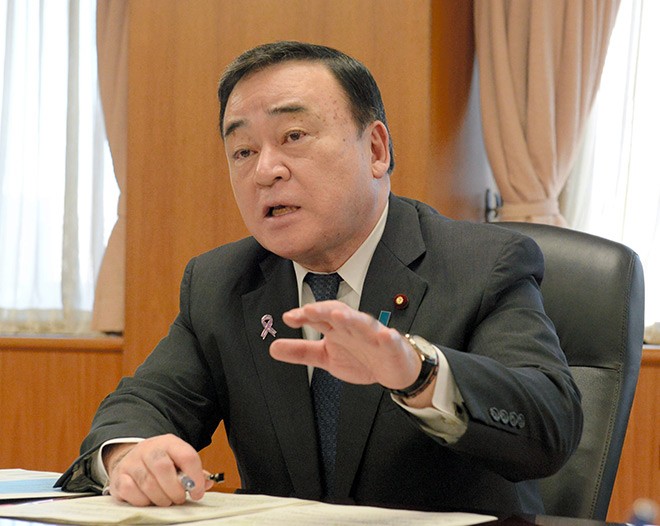 Industry minister Hiroshi Kajiyama during an interview with The Asahi Shimbun on Nov. 10 (Yo Noguchi)

Industry minister Hiroshi Kajiyama is signaling that the government will not allow for the construction of new nuclear reactors to replace aging ones or to be installed additionally at nuclear plants for the next decade.

His position suggests the Ministry of Economy, Trade and Industry, which oversees the nuclear industry, is unlikely to discuss the option of building new reactors in the new Basic Energy Plan it has been developing.

The plan has been revised twice since the 2011 Fukushima nuclear disaster.

Heeding a national sentiment exceedingly anxious of nuclear energy, the government has passed up discussing building new reactors in past revisions of the plan.

In an interview with The Asahi Shimbun on Nov. 10, Kajiyama acknowledged it is still premature to discuss the issue now.

“Public faith has yet to be restored,” he said of public sentiment toward nuclear energy after the triple meltdown at the Fukushima plant. “How can we proceed (without it) in constructing new reactors to replace aging ones or to make additions? We are simply not at the stage where we can talk about the next move.”

Kajiyama said the government’s priority over the next 10 years will be regaining public faith in the nuclear industry, rather than pushing for the construction of new reactors.

But he defended nuclear energy as a “necessary energy” source that the country will still need to rely on.

He said the nation’s 36 nuclear reactors, including three that were under construction before the Fukushima accident occurred, “should be fully utilized.”

The minister said the number of nuclear reactors that will be reactivated over the coming decade will be a point that the government will take into account as an indication of the public’s acceptance of nuclear energy when it comes to mulling over constructing new reactors.

“It is also related to the government’s goal of achieving carbon neutrality in 2050,” he said.

His comments suggest the government may begin considering constructing new reactors if more local governments approve restarting nuclear plants that were idled after the Fukushima accident.

Kajiyama underlined the need to develop small modular reactors, which are smaller than conventional reactors.

He said engaging in a modular reactor project would be meaningful when it comes to maintaining the nation’s technology for safeguarding nuclear power and nurturing scientists in the field--not to mention the potential for spinoffs.

“It could lead to the development of new materials and other technologies,” he said.

That may prompt a possible review of Japan’s current energy target for fiscal 2030, with nuclear power and renewables accounting for 20-22 percent and 22-24 percent of total power generation, respectively.

But Kajiyama said whether the 2030 target will be revised is up in the air, as more consultation with energy experts is needed.

The industry minister also doused hopes for the early introduction of carbon taxes and the emission trading system, both of which are initiatives aimed at spurring businesses to cut their carbon dioxide emissions.

“They may eventually be introduced but doing so in the early stages will prove extremely costly,” he said.

(This story was written by Hiroki Ito and Rintaro Sakurai.)