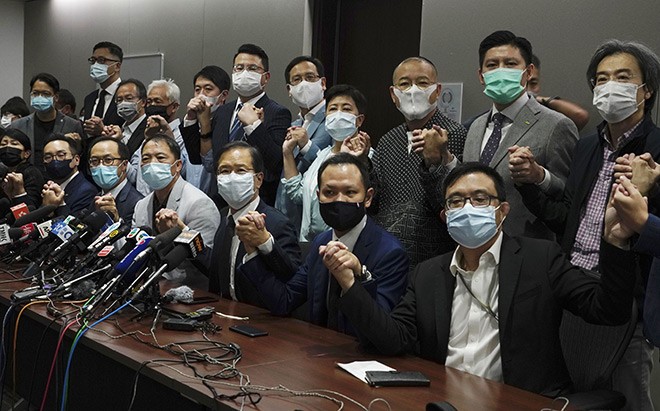 Hong Kong's pro-democracy lawmakers pose for a photo before a news conference at Legislative Council in Hong Kong on Nov. 11. (AP Photo)

Hong Kong’s autonomy and democracy are being suffocated.

China has taken another outrageous step to press the vibrant and freewheeling urban society into its mold.

The Standing Committee of China’s National People’s Congress has introduced new requirements for the qualifications of members of Hong Kong’s legislature, the Legislative Council.

China has promised the international community to guarantee Hong Kong “a high degree of autonomy.” Running counter to the pledge, however, Beijing has significantly expanded the criteria for removing Hong Kong lawmakers from office.

The move represents another attempt to eviscerate Hong Kong’s “one country, two systems” framework following a national security law imposed to crack down on anti-government activities. It is totally unacceptable.

The Legislative Council has been an important institution to support the freedom of speech. The pro-Beijing bloc’s majority has not prevented open debate with the pro-democracy camp on the floor of the legislature. Some important bills were abolished after deliberations.

But the legislature appears to have proved an irritant for Beijing.

A resolution passed by the Standing Committee stipulates, for example, that any lawmaker who refuses to pledge loyalty to Hong Kong or threatens national security should be disqualified. The criteria are largely vague and leave much room for arbitrary decisions.

The step could allow Hong Kong authorities to expel pro-democracy legislators on the grounds of many of the actions they have taken, such as protesting against the government and dissenting from its policies. It will also probably change the way the legislature is operated.

Most of the pro-democracy lawmakers have been elected through direct vote by Hong Kong citizens.

Unilaterally stripping them of their seats on the basis of their political activities is nothing but thought suppression and an outright denial of democracy.

The Chinese government has steadily tightened its control on the legislature by excluding pro-democracy candidates through the qualification screening process.

A Legislative Council election originally scheduled this autumn was postponed by a year by the Hong Kong government, which cited the novel coronavirus as the reason. Many analysts say the decision was aimed at weakening the momentum of the pro-democracy movement.

All these moves suggest that China’s Communist Party is seeking to silence the voices for democracy in Hong Kong.

The decision made by the Standing Committee of China’s National People’s Congress prompted the Hong Kong administration to declare that it would oust four pro-democracy lawmakers from their offices.

Many lawmakers from the pro-democracy bloc reportedly said they will resign en masse to protest the expulsion of the four members.

The current situation will leave the legislature dominated by pro-China members, paving the way for accelerated efforts to enact laws in line with Beijing’s intentions.

The latest move has provoked expressions of concern from the governments of Japan and Western countries.

While the Communist Party has shown no signs of willingness to soften its stance toward Hong Kong, the international community should step up its collective pressure on Beijing.

If the rest of the world simply lets China get away with ignoring its own promises and running roughshod over the rule of law, the dire consequences will be felt not only in surrounding areas but in other parts of the world as well.

All nations including Japan should consider the situation in Hong Kong as a problem that has a direct bearing on themselves.