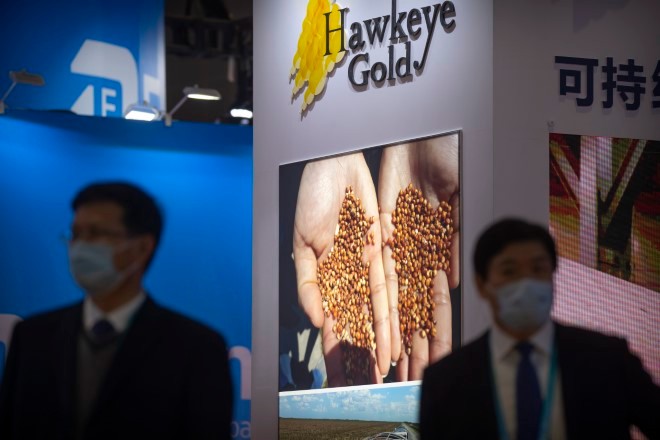 Visitors wearing face masks to protect against the coronavirus look walk past a display from the U.S. Grains Council at the China International Import Expo in Shanghai on Nov. 5. (AP Photo)

BEIJING/BUENOS AIRES/SINGAPORE--Chinese feed producers, pig farmers and traders are reshaping the global grain market as they scour the world for supplies amid a domestic shortfall that sent local corn prices to record highs and is expected to fuel global food inflation in 2021.

The country’s buying has put it on a trajectory to emerge as the top grain buyer by far this season, shattering previous purchase records and marking a clear break from China’s history as a relatively self-sufficient player in grain markets.

That purchasing, and problems in other key producing countries, has helped lift corn, wheat and barley prices worldwide--potentially sending shocks through the grain-reliant dairy and meat sectors in coming months, analysts and traders said.

“The big development in grain markets is China turning into the world’s biggest corn importer; it’s something that people didn’t see coming so soon,” said Philippe Chalmin, a French economist and director of commodities report Cyclope. The key catalyst for China’s grain splurge has been a widening shortfall in domestic corn output that has triggered unprecedented waves of imports and substitution in the world’s top grain consumer.

Export prices of U.S. corn, Russian wheat and French barley have rallied 25-30 percent since May, while the United Nations’ global cereals price index is up 17 percent from a year ago to its highest in more than five years.

Chicago corn and wheat futures have climbed 25 percent and 17.5 percent respectively in the past three months.

“In China, corn prices and the currency are both at multi-year highs, so buyers are aggressively looking to import,” said Darin Friedrichs, senior analyst at StoneX.

China’s imports of barley, corn, sorghum and wheat jumped 83.3 percent to 20.86 million tons in the first nine months of 2020 from the same period in 2019, Chinese customs data showed, and more record-setting crop purchases are expected.

“As corn prices are constantly rising and are expected to continue to rise, when it comes to substitute grains including imported barley, sorghum, and wheat, I am already making purchases for January-June next year,” said a purchasing manager with a feed producer in southern China, who has already bought more than 200,000 tons of corn from the U.S. and Ukraine, plus sorghum and barley from the U.S., Argentina and France.

China’s grain buying has accelerated since May as Beijing burned through once-huge stockpiles and as extreme weather damaged this year’s corn crop.

The fall in supplies has combined with strong demand from the animal feed industry to open a shortfall of 20 million to 30 million tons in grains supply in China this season.

The industry has rebounded after two poor years during which a deadly hog disease outbreak forced the culling of hundreds of millions of pigs in China. The country is rapidly rebuilding its hog herd, by far the world’s largest.

“We don’t have enough domestic (corn) supplies, while demand from the pig sector is expected to be even higher,” said a manager with a major pig farmer based in northern China, who was not authorized to speak to the media and declined to be named. “We buy whatever we can get and whenever we see fit.”

China’s future crop purchases are already at record highs. Buyers have booked about 17 million tons of corn for the 2020-21 marketing year, which started Sept. 1, and are poised to buy more, lifting China alongside Japan as the world’s second-largest corn importers. More purchases could take China beyond top buyer Mexico.

On the demand side, key buyers such as meat producers in Brazil have already been hurt by grain scarcity and inflation. Other major end users are expected to feel the sting from rising grain costs in 2021.

On the supply side, weather damage has tightened the availability of corn in the United States, wheat in the Black Sea area, and rice in Southeast Asia this year.

China also bought a majority of France’s barley exports--1.08 million tons in January-September, compared with 612,945 tons in 2019, according to China customs data.

Barley and sorghum exports from Argentina, Ukraine and Canada have also jumped this year, helping push some key crop export prices as much as 50 percent higher from a year ago.

“China made the smart move in booking grain and oilseed shipments months before prices shot up,” said Ole Houe, director of advisory services at brokerage IKON Commodities in Sydney.

Additional U.S. corn purchases are also expected. “The best option is to buy lots of U.S. corn, while the second-best choice is to have piles of imported barley, sorghum sitting in your stocks,” said the manager with the feed producer. “We will constantly buy as long as there are feed grains with price advantage, as the demand for corn is always there.”