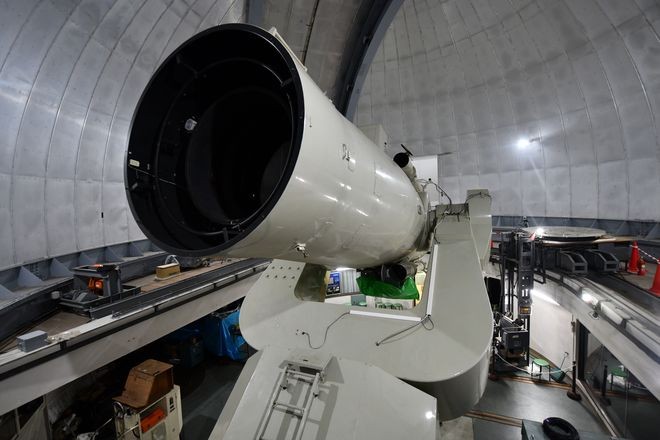 Nearly a ton of shooting stars fall on the Earth daily, according to the latest survey, but not to worry, it's mostly an accumulation of space dust.

The joint study predicted the volume of tiny pieces of dust weighing 0.01 milligram to 1 gram that travel here from outer space for the first time, according to the scientists.

When dust deriving from comets and asteroids enters the atmosphere at high speed in a phenomenon commonly known as falling stars, the air around the dust ionizes and reflects radio waves, allowing astronomers to observe meteors with radar.

But how radio waves are reflected by shooting stars of certain sizes had been unclear.

Ryo Osawa, a specially appointed assistant professor of astronomy at the University of Tokyo’s Kiso Observatory, and his colleagues in April 2018 used the Tomoe Gozen high-sensitivity video camera to monitor the sky above Shiga Prefecture.

They estimated the weights of observed falling stars based on their brightness levels and speeds, and combined the data with the radio wave reflection intensity measured by the MU atmosphere observation radar at Kyoto University’s Research Institute for Sustainable Humanosphere.

Comparing the integrated information with radio wave monitoring records in the past, the scientists said they found that at least one fragment of dust weighing more than 1 milligram fell in an area of 50 square kilometers per hour.

“Next up, we'll examine if there is a bias in weight for meteors whose origins have been confirmed, such as the Orionids,” Osawa said.

Nihon University and the National Institute of Polar Research were also part of the team that analyzed the data.

Readers can view the team's findings, published in the journal Planetary and Space Science at (https://www.sciencedirect.com/science/article/abs/pii/S0032063319304246).