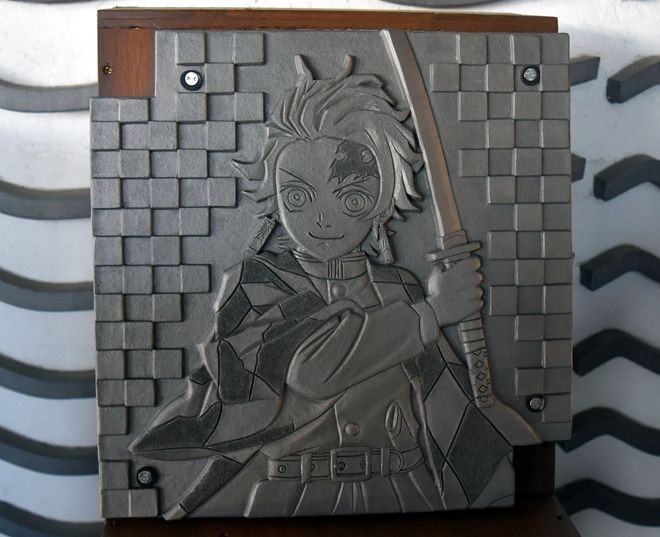 TAKAHAMA, Aichi Prefecture--After blowing the roof off box offices, the hugely popular “Demon Slayer” anime series is now being adopted into traditional-style housetop ornaments to let fans proclaim their love for the series from their rooftops.

Local "onishi" roof-tile artisans have put a modern twist on an old tradition by making tile plates that feature characters from the "Demon Slayer: Kimetsu no Yaiba" manga and anime series, as part of a collaborative event that taps into the cultural phenomenon.

Traditional "onigawara" ornamental roof tiles are usually shaped like the faces of fearsome "oni" demons to scare away evil spirits and ward off bad luck.

The series-inspired plates have a matte silver finish and are embossed with protagonist Tanjiro Kamado and other characters and motifs.

A monument boasting 15 of the tile plates created by local onishi was unveiled at a ceremony on Oct. 30. The monument will be on display in front of city hall until Jan. 29.

"I hope it serves as a catalyst to promote the charms of matte silver tiles, onishi and onigawara," Eisuke Yamamoto, head director of the industrial cooperative association for Sanshukawara tile makers, said during the ceremony.

Takahama Mayor Hatsuhiro Yoshioka added: "I hope many people will come to Takahama and help promote (onigawara tiles) across the country."

While the collaborative event is on, the local tourist information office and the Takahama Kawara Museum are selling various artisanal items, including paperweights and magnets, made of tiles and handcrafted by onishi.

They are also available at an online shop run by the association (http://www.sansyuu.net/).

A digital stamp collecting game is also running during the event, where participants can visit designated spots across the city to take photos with their smartphones and collect different digital stamps featuring the characters.

A workshop collaborative event is also on tap, where onishi will teach participants how to make paperweights designed with "Demon Slayer" characters by pressing clay into a mold. Those who wish to participate must register in advance.

The original "Demon Slayer" manga series, written and illustrated by Koyoharu Gotoge, started its initial run in Shueisha Inc.'s Weekly Shonen Jump comic anthology in 2016 before it concluded in May this year. Its popularity surged after an animated TV series adaptation debuted in 2019, spawning a hit theme song and a variety of collaborative merchandise.

"Demon Slayer the Movie: Mugen Train," an animated feature film adaptation directed by Haruo Sotozaki, opened nationwide on Oct. 16, and has enjoyed a record-breaking run at the box office.