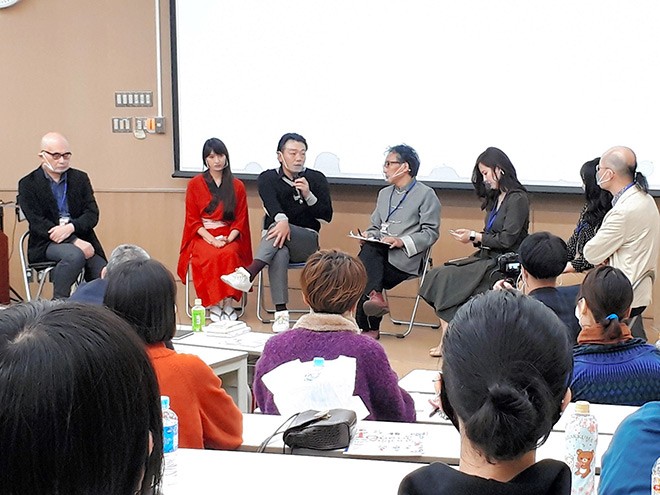 A panel of scholars and artists at the “KINBAKU New Wave x Asian Humanities” symposium held at Kyoto University on Oct. 24 (Erena Tanaka)

Prestigious Kyoto University took down a video of a live performance of Japanese rope bondage at a symposium it hosted after footage of the event went viral on social media and one person complained.

It made the decision after a single viewer called to question whether the university seriously considered bondage as a legitimate field of academic study.

The event was held on the Kyoto campus on Oct. 24 and co-hosted by the university’s Unit of Kyoto Initiatives for the Humanities and Social Sciences and the Center for Applied Philosophy and Ethics.

Event organizers said their objective was to “explore the significance and potentialities” of kinbaku, also known as “shibari,” which is viewed by many people as a form of Japanese S&M, in light of the fact it is currently “transforming itself into a new trend of contemporary art.”

During a demonstration segment of the event, a male “kinbakushi” (rope master) tied up a female model and suspended her above the floor.

The symposium was live-streamed on YouTube. More than 600 people attended the venue or watched it online. The video was also archived on a website and made available for two weeks afterward.

Event organizers were apparently caught by surprise when the performance created a buzz on social media. The video attracted strong overseas interest and was played about 590,000 times.

News media noted the phenomenon and contacted the university on Nov. 5, according to university officials.

A local newspaper published a photo of the event, which led one reader to call the university and ask, “Is this an academic subject?”

That single phone call was enough for the organizers to take down the video immediately, a day earlier than scheduled.

“We apologize for making someone uncomfortable with some segments of the symposium video,” the organizers said in a statement posted on their website. “We will give due consideration to the archived video.”

Yasuo Deguchi, a professor at the department of Philosophy who organized the symposium, told The Asahi Shimbun: “Even if it’s only one person, I am sorry to make that person uncomfortable. Other people might have felt that way, too.”

Deguchi said he is planning to publish a book on the contents of the symposium as early as next year.

“I hope gender-issue experts to join the (publication project) and include issues that were not discussed at the symposium due to time constraints,” Deguchi said.

The symposium featured a rope master, a bondage artist, a model and several scholars.

They explained that kinbaku originated from the martial arts and its methods of restraining captives in the age of provincial wars that raged from the mid-15th century to the early 17th century.

Most recently, fashion brand Christian Dior debuted a handbag inspired by kinbaku, and the singer Aimyon featured kinbaku in one of her music videos, a panelist noted.

During the panel discussion, Deguchi cited an entrenched viewpoint that “kinbaku culture is deeply embedded in asymmetric male-female domination-subjugation dynamics.”

The comment prompted the female model to respond, “I am in love with the design of shibari and its beautiful techniques.”

She went on to say that she regards shibari as a form of expression and stages performances with the “mind-set that I am creating a work together with (a rope master) with whom I have an equal relationship.”

The organizers’ decision to take down the video and offer a public apology so quickly stirred criticism from people who feared it went against freedom of academic expression.

He called the Kyoto organizers’ decision to take down the video unfortunate.

“I want (them) to be cautious about giving it up simply because they have been criticized by people who say, ‘I feel uncomfortable,’” Murata said. “It is unfortunate, even though there was only one more day left for the video to be viewed before it became unavailable. And if their decision was based on a singly protest, it is even more unfortunate.”

Murata, who noted that “any artistic work gets a mixed reception,” has been riled by closures of art exhibitions on grounds the displays are too provocative.

“That deprives the public of an opportunity to be exposed to diverse forms of expression and different point of views,” he said. “That is the biggest problem.”

Sakiko Ohno, who has written extensively about art, offered a different perspective.

“It is fine to study kinbaku as Japanese culture and art,” she said. “But it is supposed to be enjoyed in a secretive space. By airing such a thing on YouTube, where anybody can see it, the organizers should have expected it to draw objections.”

To Ohno, the reaction was hardly surprising.

“The organizers were unprepared to field criticism. I wonder if they thought they could rest on their thinking that it’s art and people will understand,” she said.

(This article was written by Erena Tanaka and Michitaka Kono.)