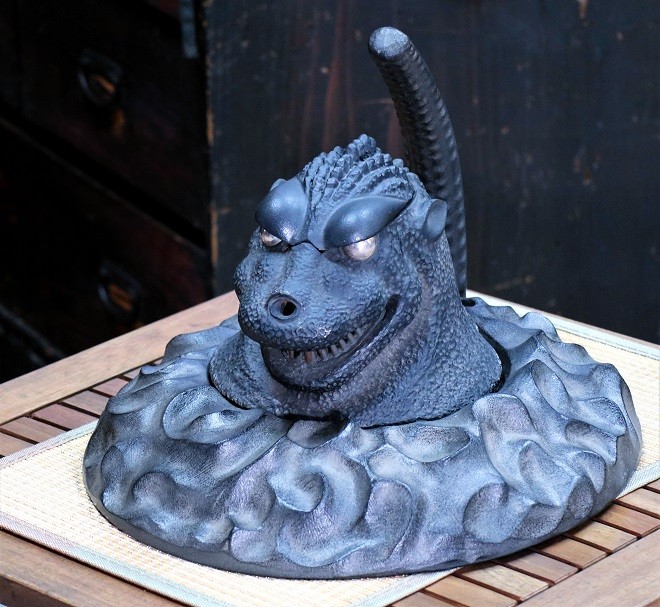 OSHU, Iwate Prefecture--The king of monsters has landed in a fine kettle of fish again, this time literally, becoming a mighty iron kettle himself, with a whopping price tag of 1 million yen ($9,530), excluding tax.

The monstrous creation that realistically re-creates Godzilla's head as a cast-iron kettle captured the Castings of the Year award, the top prize awarded by the Japan Foundry Engineering Society.

Oshu-based foundry company Oitomi produced the piece of traditional "Nanbu tekki" ironware after going through many prototypes. Oitomi also followed instructions from Toho Co., the film studio behind the Godzilla films, on how to handle minor details of the creature such as the location of its eyes.

The JFES awards prizes each year to a few products that have contributed to the development of the foundry industry.

Kazumichi Shimizu, chair of the society, who also serves as a professor at Muroran Institute of Technology's Graduate School, had high praise for Oitomi's efforts during a visit to the foundry on Oct. 28 to honor its achievement.

The kettle, which can boil water and uses the monster's nose for a spout, is 27 centimeters high, 36 cm deep and 30 cm wide. It weighs about 7.8 kilograms, or 15.2 kg, when the mount is included.

Oitomi has produced a limited run of 65 units, the company said, and has sold 22 to date.

Akira Takarada, 86, who starred in the original 1954 "Godzilla" movie, played a major role in the kettle's production.

The president of an Oitomi's client company based in Tokyo who encouraged Oitomi to make the kettle offered to introduce the foundry to Takarada, according to Akira Kikuchi, 63, Oitomi's managing director.