Aegis Ashore alternative runs to at least 1.5 times the cost 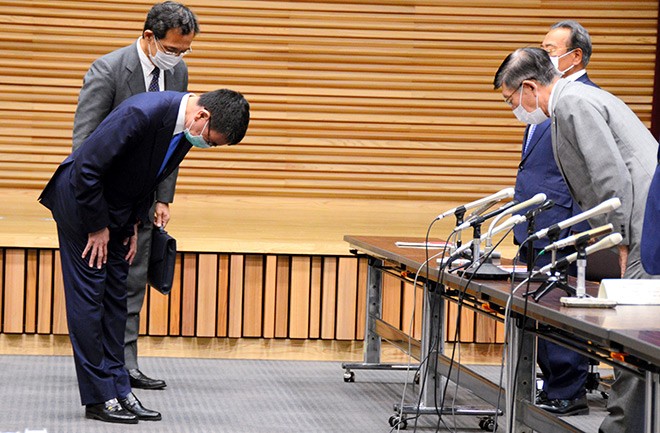 Defense Minister Taro Kono apologizes in June 2020 to Akita Governor Norihisa Satake after his decision to scrap the land-based Aegis Ashore system that had been planned to be deployed to a Ground Self-Defense Force training area in Akita Prefecture. (Asahi Shimbun file photo)

An internal Defense Ministry document on the cost-efficiency of the massively expensive land-based Aegis Ashore ballistic missile defense system that Japan had planned to deploy is now coming back to haunt the top echelon.

Lower-ranking officials suggest that those in senior positions do not want to divulge the contents of the document because the higher costing alternative laid out in the paper is now considered the leading option for the nation’s next missile defense program.

Taro Kono, who was then the defense minister, abruptly ditched plans to deploy the U.S.-developed missile interception system last June, citing modifications to the booster rocket to ensure it does not fall on residential areas was too expensive.

The system was intended to serve as a shield against high-tech projectiles launched by North Korea and to counter possible aggression by China.

As an alternative, the Defense Ministry is considering relocating the land-based equipment to either a Maritime Self-Defense Force destroyer, a private-sector vessel or a modified oil rig that would serve as a megafloat.

Of the three choices, using the MSDF destroyer has emerged as the leading option.

The document compiled in late 2019 was intended to ram home the assertion to local authorities that the Aegis Ashore system was more cost-effective than purchasing and maintaining MSDF Aegis destroyers.

It compared the so-called life cycle costs of the two options that covered not just the purchase price but maintenance expenses over a 30-year period.

The Abe administration in late 2017 decided to purchase the Aegis Ashore system and in May the following year Ground SDF training areas in Akita Prefecture in northern Japan and Yamaguchi Prefecture in western Japan were picked as the candidate sites.

Such a deployment would have provided coverage of almost the entire Japanese archipelago against ballistic missile attacks.

But a further analysis of modifying the booster rocket that helps propel the interceptor missile against an incoming ballistic projectile came with a cost estimate of about 200 billion yen.

While it now turns out that paying for that modification would have been cheaper than purchasing two Aegis destroyers, the government in June decided to abandon the Aegis Ashore system altogether.

Moreover, there has never been any attempt to take the Aegis Ashore land-based equipment and install it on a ship, as Defense Ministry officials are now considering.

Ministry officials involved in looking for an alternative said “a gigantic amount” in the range of several hundred billion yen would likely now have to be spent additionally to allow for applying the land-based equipment on a MSDF ship.

However, since the decision to cancel the Aegis Ashore program, Defense Ministry officials have become more hesitant about divulging documents and estimates about the additional costs involved in acquiring an alternative missile defense system.

Ministry officials involved in seeking out an alternative are resigned to the fact that cost estimates will have to be released to spur a proper study and discussion of what option to choose.

The MSDF currently has seven Aegis destroyers with an eighth scheduled to go into service from March 2021. If two additional MSDF destroyers are loaded with the Aegis Ashore equipment, the MSDF would have a total of 10 ships with Aegis capabilities.

Defense Ministry officials had also claimed that having two land-based Aegis Ashore systems would provide around-the-clock protection against ballistic missiles and that “all of Japan would be under constant and sustained protection.”

The ministry, on the other hand, said while eight Aegis destroyers were needed to provide the same kind of protection, even such a fleet still left holes in the missile defense system, admitting that depending only on Aegis destroyers made Japan vulnerable to ballistic missiles launched by North Korea.

And even if the two additional MSDF destroyers were equipped with the Aegis Ashore land-based parts and equipment, the Aegis destroyers could not be easily moved to other waters, such as the East China Sea where China is making increasing inroads.