Ship remembered for saving 800 Russian children a century ago 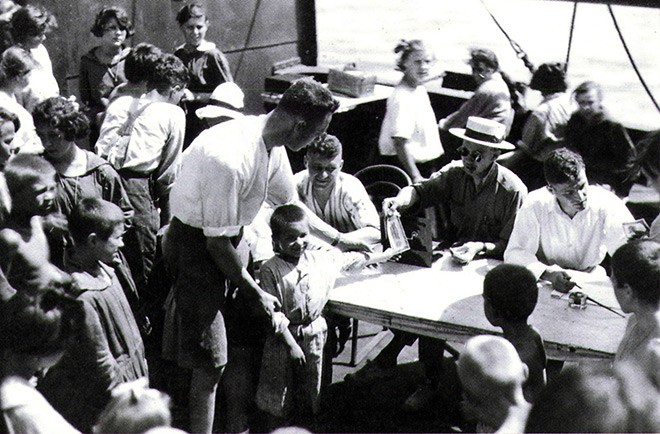 Pocket money is distributed to children aboard the Yomei Maru ahead of their temporary disembarkation in San Francisco in 1920. (Provided by the Yomei Maru remembrance society)

For nearly a century, a Japanese ship’s voyage to rescue some 800 Russian children caught up in the turmoil of the wake of the Russian Revolution remained lost in history.

But the humanitarian episode has resurfaced, thanks to the long efforts and hard work of a Russian woman and a Japanese artist, before the 100th anniversary this autumn.

Mikhail Sergeev, Russia’s consul-general in Niigata, received a letter during a meeting on Japan-Russia exchanges that was held in Kanazawa, the capital of Ishikawa Prefecture, on Oct. 19.

The letter refers to the three-month journey of the Yomei Maru, the ship that embarked from the Russian Far East and traveled across two oceans through the United States to bring the child refugees home in 1920.

“I would like you to learn closely about this amazing page of history so ambassadorial activities between Japan and Russia will draw on that precious precedent of humanism,” part of the letter said.

Sergeev has been working on historical research on Russian captives from the Russo-Japanese War of 1904-1905.

The letter was handed to Sergeev by Nanen Kitamuro, a 73-year-old seal engraving artist from Nomi, Ishikawa Prefecture. It had been entrusted to her by Olga Molkina, a 66-year-old Russian whose grandparents were aboard the Yomei Maru.

The ties between Kitamuro and Molkina have shed light on the long-forgotten episode of history.

The two women first met in September 2009, when Molkina visited Kitamuro, who was giving a one-person exhibition in St. Petersburg.

“I am looking for descendants of Captain Kayahara,” Molkina told Kitamuro at the time. “I wish to thank them on behalf of the offspring of the child refugees.”

She said she had pored over historical records in Russia and the United States, but Kayahara alone remained unidentifiable. The sole clue she had was a photo of the captain in uniform, kept by a friend of her grandparents.

Kitamuro spent nearly two years making the rounds of marine transport operators, libraries and antiquarian bookshops until she finally came across the name of Motoji Kayahara in a thick register book of seafarers’ names published in the late Taisho Era (1912-1926).

She learned that the captain’s relatives were maintaining his grave in Kasaoka, Okayama Prefecture. Molkina finally visited the grave in October 2011.

As she offered a bouquet and a Russian flag in front of Kayahara’s grave, Molkina told the deceased captain, “Your soul remains forever alive in the hearts of the offspring of the Russian refugees.”

Molkina and Kitamuro have been working extensively on investigation, research and private-sector exchange related to the subject.

Molkina heads a society of the offspring of the Russian child refugees. Kitamuro founded the nonprofit “society for remembering the Yomei Maru, a humanitarian ship” in 2013 and serves as chief director.

In 1918, as a civil war was intensifying between the Red Army, the White Army and other forces in the aftermath of the Russian Revolution of the previous year, a group of 895 children, roughly between the ages of 5 and 15, evacuated from Petrograd, today’s St. Petersburg and Russia’s capital at the time, to the Southern Urals.

They evacuated farther to the Far Eastern city of Vladivostok in 1919 under the assistance of the American Red Cross.

Japan was deploying troops at the time in Siberia with the United States, Britain and France, by way of military intervention in the Russian Revolution. The Siberia Intervention lasted from 1918 through 1922.

The ARC decided to send the children home by a route through the United States out of consideration for their safety.

The U.S. government and marine transport operators, however, hesitated to offer assistance, presumably for fear of offending the Moscow government, which viewed the custody of the children as an unjustifiable act of detention.

The Yomei Maru, captained by Kayahara, emerged as their savior.

It was Ginjiro Katsuta, the Yomei Maru’s owner and the president of a Kobe shipping company, who agreed to comply with a request from Riley Allen, head of the ARC commission to Siberia, who was scrambling to rescue the children in plight.

Rudolf Teusler, Allen’s predecessor and founder of St. Luke’s International Hospital in Tokyo, also worked hard for the cause.

The Yomei Maru set sail from Vladivostok on July 13, 1920, with a large and multinational party of more than 1,000 people aboard, including 780 of the children who were there at the time, staff workers, soldiers repatriating to other countries and Japanese crew members.

The vessel stopped at Muroran in Hokkaido, San Francisco and New York, among other ports, before arriving at Koivisto, Finland, which is not far from the children’s hometown of Petrograd, on Oct. 10, 1920.

Koivisto is now part of Russia and called Primorsk.

The Yomei Maru remembrance society published a book titled “The Yomei Maru and 800 children” from the Namiki Shobo publishing house in 2017 to pass down accounts of the history.

The society also released a DVD titled “The Yomei Maru: A great voyage of a miracle,” which summarized its findings and achievements, earlier this year to mark the centenary of the voyage.

The novel coronavirus pandemic forced the society to postpone a visit to Russia, initially planned for May this year. Kitamuro is hoping to visit the country next year.

Molkina has plans for making an edition of the DVD subtitled in Russian.

“It’s like as if I had so far been guided by ties of some sort that transcend human power,” Kitamuro said.

“Perhaps pure expression of humanitarian sentiment is never easy in our world today, but it would be so wonderful if we were to live in a world where that is possible.”