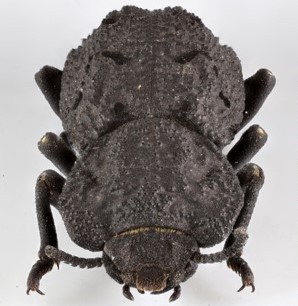 Fear not when running over a small flightless bug on the road when it's the diabolical ironclad beetle, which emerges no worse for wear.

Now, a team of researchers has unlocked the secrets of why the insect is squash-proof, which could be applied to industrial designs to make things lighter and sturdier.

The beetle has a unique structure in its exoskeleton that can tightly interlock together to make it so durable, the researchers from the Tokyo University of Agriculture and Technology, the University of California, Irvine and other institutions said.

Their findings were reported in a paper published in the British scientific journal Nature.

The diabolical ironclad beetle, which is about 3 centimeters long and about 0.5 grams in weight, dwells mostly in oak trees in the West Coast of North America.

Its unusual name stems from the fact that it actually can survive being run over by a car as well as the difficulty of piercing the insect with a pin to mount for display.

When the researchers measured the strength of the bug's exoskeleton, they discovered that it can withstand 39,000 times its body weight.

There are more than 350,000 beetle species around the world, including rhinoceros beetles and ladybugs. But the diabolical ironclad beetle is the most durable known in existence.

A close examination of the exoskeleton showed that it consisted of multilayered structures comprising bundles of protein fibers. When pressure is applied, they slightly roll back to disperse the pressure and prevent the exoskeleton from breaking all at once.

The exoskeleton also contained a higher concentration of protein than other beetles, apparently making the composition more flexible.

And the biggest secret was in the central portion of its back.

An analysis of a cross-section showed that there were two pairs of jigsaw-shaped structures that interlock the left and right sides of the insect's exoskeleton.

These structures can help the exoskeleton remain connected together even when extreme pressure is applied.

Only one pair of such structures can be found in regular beetles, the researchers said.

When flying beetles close their hardened forewings (elytra) that protect the underlying flight wings, they have the elytra hitched on one pair of the jigsaw-shaped structures.

Although the diabolical ironclad beetle can't fly, it closes its elytra while the two pairs of the structures are tightly interlocked together to make the exoskeleton so indestructible.

The insect may have evolved its wings in a unique way to protect itself from lizards, mice and other predators, the researchers said.

"Such a biological architecture could have industrial applications for designing lighter and sturdier structures," said Atsushi Arakaki, a member of the research team and an associate professor at the Tokyo University of Agriculture and Technology specializing in bioengineering.

A research project is under way to see whether the mechanism can be applied to replace rivets used to secure iron plates, he added.

To read the paper, visit (https://www.nature.com/articles/s41586-020-2813-8). To see a video clip showing a diabolical ironclad beetle being run over by a car, go to (https://www.youtube.com/watch?v=zkH5LaoLJ3w&feature=youtu.be).