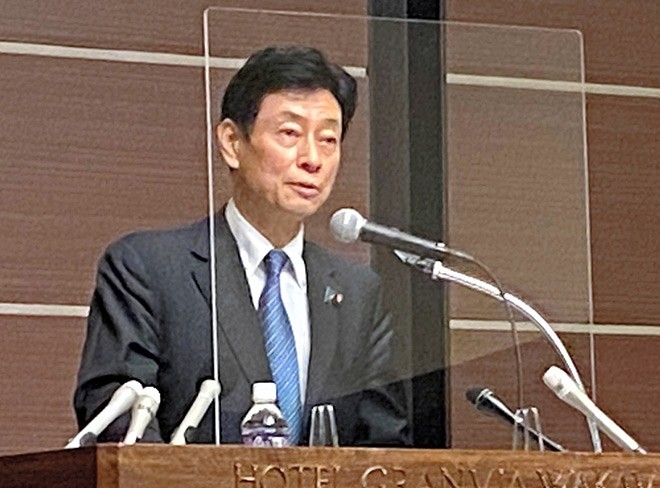 Yasutoshi Nishimura, who heads the government’s efforts to stem the novel coronavirus, speaks at a news conference in Wakayama on Nov. 14. (Ayako Nakada)

As the government seeks to contain surging COVID-19 cases, the nation again set a new daily record with 1,737 on Nov. 14, for the third consecutive day, according to data released the same day.

Three new deaths related to the novel coronavirus were also reported that day.

Kanagawa Prefecture, whose accumulated total of infections reached 10,042 on Nov. 14, followed Tokyo and Osaka in surpassing the 10,000 threshold since the pandemic began earlier this year, according to Asahi Shimbun data.

Metropolises have been reporting large numbers of new infections in the past weeks.

Serious cases--patients on ventilators or on extracorporeal membrane oxygenation (ECMO) lung bypass machines, based on the definition by the Tokyo metropolitan government--stood at 41, the highest since a state of emergency over the coronavirus was lifted for Tokyo in late May.

Osaka Prefecture’s new high of 285 for single-day cases followed the previous record set on Nov. 13. The count on Nov. 14 also marked the fifth consecutive day for the prefecture to report 200 or more in a single day.

On Nov. 14, Hokkaido, which has seen spikes in new infections, reported 230, while Aichi Prefecture, which includes Nagoya, logged 152. The numbers in the two prefectures were more or less the same as the previous day.

Heeding the flurry of reports on clusters of infections at restaurants and workplaces across the country, the government plans to strengthen guidelines concerning precautionary measures for the food service industry.

“We want to update the guidelines and present them as soon as we can,” Yasutoshi Nishimura, who heads the central government’s efforts to stem the novel coronavirus, told reporters on Nov. 14 in Wakayama, where he was visiting.

Government officials are expected to meet with industry representatives and experts as early as next week to discuss the options.

Likely measures include panels to separate customers will be installed not only for patrons seated across from each other, but also for those seated next to each other; devices that monitor carbon dioxide concentrations will be utilized to gauge the level of ventilation; and diners will be asked to wear masks as long as possible while eating and drinking.

As for the government’s “Go To Travel” campaign, which partially subsidizes the costs of trips and tours, Nishimura hinted at the possibility that the government may be forced to review the program, depending on developments in the coming days.

“If the number of new cases explode, we may have to review it while taking into consideration the intentions of each prefecture,” he said.