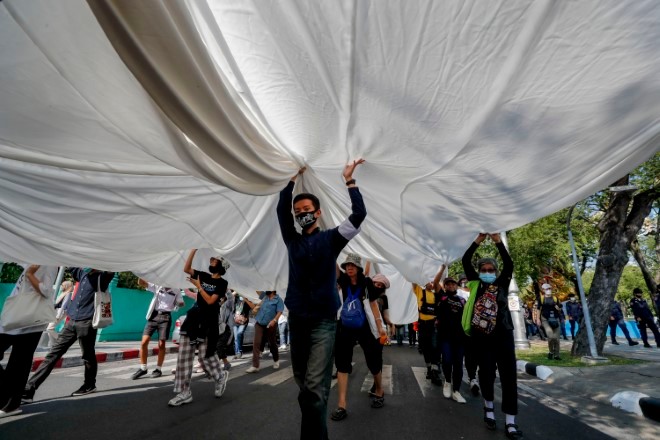 Students led pro-democracy protesters carry a massive white-fabric during a protest march to the Democracy Monument in Bangkok on Nov. 14. (AP Photo)

BANGKOK--Pro-democracy protesters in Thailand rallied again on Saturday, promoting a diversity of causes and taking an opportunity to display their rejection of the country’s power structure directly to the monarch.

Some 20 groups called the rally at Bangkok’s Democracy Monument under the name “Mob Fest” as the latest in a series of protests calling for significant reforms in government. Secondary school students, women’s right advocates and LGBTQ activists were among them.

The core demands of the student-led protest movement are that Prime Minister Prayuth Chan-ocha step down, the constitution be amended to make it more democratic, and the monarchy be reformed to be made more accountable.

The movement has put pressure on Prayuth’s government, which after failing to stop it through the use of police force has now scheduled a session of Parliament for Tuesday and Wednesday to debate changes to the constitution.

The protest movement, anticipating that the lawmakers will not take substantive action, has already called what it expects will be its biggest march so far for Nov. 21.

The demand over the monarchy is the most controversial one because the royal institution is traditionally regarded as the heart and soul of the nation, and to be treated with the utmost respect. It is protected by a law that makes defaming the monarch punishable by up to 15 years in prison.

The army, a major influence in Thai politics, has declared defense of the monarchy to be one of its main duties, and many ordinary citizens also regards it with devotion.

The protest movement, however, has prioritized the issue of reforming the monarchy because it believes that the institution holds too much power and that change is the key to establishing true democracy. They are undertaking their unprecedented challenge even at the risk of violent blowback from hardcore royalists.

A crowd of several thousand protesters at Democracy Monument on Saturday showed their sentiment when a royal motorcade with King Maha Vajiralongkorn passed by. They turned their backs, put their hands in the air to display their three-finger protest gesture and sang the national anthem. A small contingent of royalists across the street shouted, “Long live the king.”

The king and Queen Suthida were headed to preside over the opening of a new mass transit station elsewhere in the capital. The royal couple in recent weeks have maintained a busy schedule of public events, buoying their followers.

As has been the case at several recent events, after taking part in the formal ceremony, they stepped out to mingle with reverent members of the general public who cheered them loudly and waved Thai flags, many wearing the yellow shirts identified with loyalty to the crown.

The pro-democracy protesters back across town, meanwhile, wrapped a large white cloth around Democracy Monument on which they wrote messages to the government with their demands and their wishes for the future. The effect of the covering was especially dramatic when lights shone on the monument after dark.

Police initially tried to stop their action, triggering a small clash that left one police officer with a leg injury that caused him to be taken to a hospital.

However, the general atmosphere at the rally was festive as a variety of groups promoted their causes with petitions and speeches, and music entertained the crowd.

The “Bad Students” group, as they mockingly call themselves, gathered earlier at the Education Ministry to air their complaints about an education system they consider antiquated and authoritarian, with unreasonable regulations. They have already won some concessions on dress codes and hairstyles but seek reforms in the curriculum as well.

The students displayed a white coffin with a photo of Education Minister Nataphol Teepsuwan, and declared they support the broader movement’s demand for constitutional change.

The group Women for Freedom and Democracy did lobbying work concerning laws on abortion, domestic violence, prostitution and other issues. One booth supported prisoners’ rights.

Other speakers included a Buddhist monk and an advocate for stateless people, who in Thailand usually belong to hilltribe minorities.