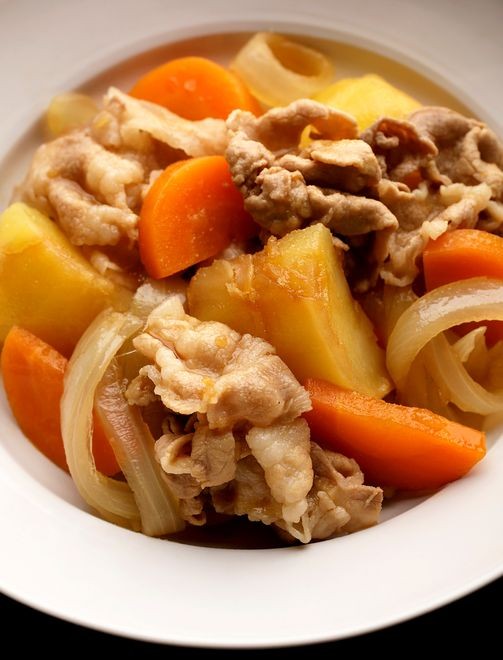 Although “nikujaga” (literally “meat and potato”) hot pot is a staple dish on the dinner table, it features many ingredients and is more difficult to simmer evenly than expected.

Let us try to have it both ways to “get the right flavor without letting the ingredients fall apart.”

Keys to prevent the potato from falling apart while simmering includes using the May Queen variety, creating a film of oil by stir-frying at first and using a volume of cooking liquid that is less than just enough to cover the ingredients. If less liquid is used, simmering time to reduce it is shortened and the moments when the potato becomes tender and the right flavor is achieved synchronize.

The seasonings are added in two parts. Akiko Watanabe, who supervised the cooking aspect of the recipe, explains the reason as, “After the flavor seeps inside the ingredients, the second set of seasonings coats the surface once more at the end.”

Decide when the dish is done by “tasting the simmering liquid.” Although we tend to check the taste by nibbling on an ingredient, it is difficult to tell the taste when it is piping hot.

“If the simmering liquid tastes good, turn off the heat, leave for a while so the dish cools a little. The flavor seeps in further and tastes better after some time has elapsed,” says Watanabe.

USE THIN SLICES OF MEAT

Scraps (“komagire-niku”) of pork belly (“buta-bara”) and leg (“buta-momo”) were used for this week’s nikujaga recipe. According to a spokesman for the All Japan Meat Industry Co-operative Associations, although there is no clear definition of komagire-niku, it is usually scraps of unspecified parts such as the belly and leg and in many cases, consist of various parts.

On the other hand, meat called “kiriotoshi-niku” (cut-end meat) usually offers cut ends of specific parts such as leg and chuck (“kata-rosu-kiriotoshi”). In recent years, meat is often cut up to be sold as cut ends.

“For the nikujaga hot pot, meat that is sliced as thin as possible is recommended so it will take on the flavor well,” says Watanabe, who oversaw the cooking aspect.

1. Cut pork into width of 5 to 6 cm. Peel potatoes, chop randomly into pieces 3 to 4 cm on a side and immerse in water. Drain and pat dry. Remove core from onion, cut lengthwise into 1-cm-wide slices. Peel carrot and cut into semicircular slices 5 to 6 mm wide.

3. Add dashi stock to pot and bring to a boil. Add Seasonings 1 and pork (PHOTO B) and scoop out harshness. Add onion, place lid and simmer over low heat for 10 minutes.

4. Add Seasonings 2, turn sides of potato pieces, place lid and simmer over low heat for 8 to 10 minutes until they turn tender. Taste cooking liquid and when it has the right strength, turn off heat (PHOTO C).

Just like nikujaga, an ingredient that is likely to fall apart when cooked is simmered and flavored in a modest amount of liquid.

Scoop out the pith and seeds from 1/4 pumpkin and cut into pieces 3 to 4 cm on a side. Heat 2 tsp oil in pot and stir-fry pumpkin.

When oil has gone around, add 150 ml dashi stock, 1 Tbsp sugar, 1 tsp soy sauce and bit of salt and bring to a boil. Turn down to low heat, place lid and simmer for 14 to 15 minutes. When pumpkin has become tender, turn off heat and leave in pot until it cools.

Ingredients fall apart through simmering when the adhesiveness between the cells weaken and they separate. This occurs when the material that joins the cells is broken down by heat or, in the case of potatoes, when the starch inside the cells absorbs water, expands and changes the shape of the cells. Since the May Queen contains less starch than the Irish Cobbler variety (“danshaku”), they are less likely to fall apart when cooked.