EDITORIAL: RCEP pact could serve as step to get global trade back on track 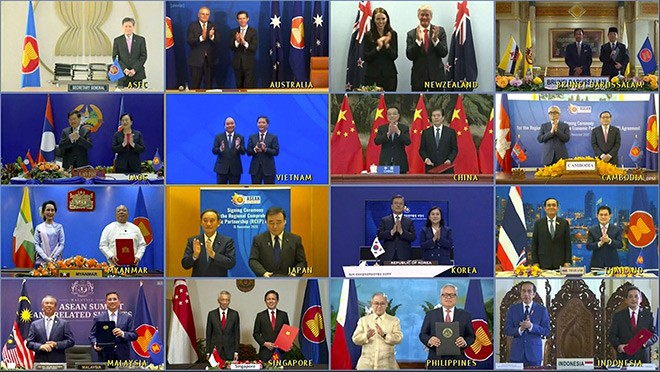 The combined population and gross domestic product (GDP) of the 15 members both account for about 30 percent of the global totals. The pact represents Japan’s first free trade agreement with China, its largest trade partner, and South Korea, its third.

The creation of a vast economic zone in the growing Asian market is expected to jump-start the revitalization of global trade, which has shrunk due to the novel coronavirus pandemic.

But it is hard to deny that the agreement has fallen short of meriting a wholehearted welcome, a consequence of placing priority on striking a deal among countries in various stages of economic development.

The pact will eliminate 91.5 percent of the tariffs on Japanese industrial exports to other RCEP members, a ratio significantly lower than the nearly 100 percent negotiated for the Trans-Pacific Partnership (TPP) trade agreement, and Japan’s bilateral free trade deal with the European Union.

Neither China nor South Korea will eliminate their tariffs on Japanese automobiles, one of the nation’s key export items, under the RCEP framework. Moreover, the tariff elimination will take about two decades for many items after the pact comes into force.

Another blow is India’s withdrawal from the negotiations, a diplomatic setback for Tokyo, which has been the leading champion for the country’s participation in the agreement.

The absence of India, which has a huge market with more than 1.3 billion consumers, will reduce the economic benefits of the RCEP.

The principal reason for India’s decision against joining in the grouping is the fear that the agreement could drive up its already massive trade deficit with China.

Japan should continue tenacious efforts to persuade India to enroll itself by supporting the country’s efforts to nurture domestic industries.

Despite these issues that remain to be addressed, Japan’s participation in the RCEP, its third large-scale free trade agreement after the TPP and its pact with the EU, has important implications.

The global trade regime is facing a serious crisis. The biggest factor is the U.S. trade policy, which has been epitomized by an acrimonious conflict with China.

Many experts believe President-elect Joe Biden will not change the protectionist trade policy adopted by President Donald Trump in any significant way at least for the time being, given that his electoral victory owes a lot to support from voters in so-called Rust Belt states.

But the RCEP could help ease tensions between the United States and China and serve as an incentive for Washington to return to the path of international cooperation.

The agreement includes a provision that bans members from demanding that foreign companies that have expanded into their markets provide their technologies to domestic players. While the pact does not contain a similar prohibition on national requirements to transfer or provide access to source code, the blueprint of a computer program, the nations have agreed to continue discussions on the issue.

These are two key intellectual property protections the United States has been demanding from China. If Beijing shows signs of changing its stance on these issues, Washington’s attitude could also change.

In principle, international trade should be governed by the rules set by the World Trade Organization (WTO).

Japan should do more to help restore the WTO’s ability to establish and enforce international rules by pressing the United States to return to the policy of pursuing and respecting multilateral trade frameworks.

This is a role Japan, the third-largest economy following the United States and China, should perform for the good of the international community.