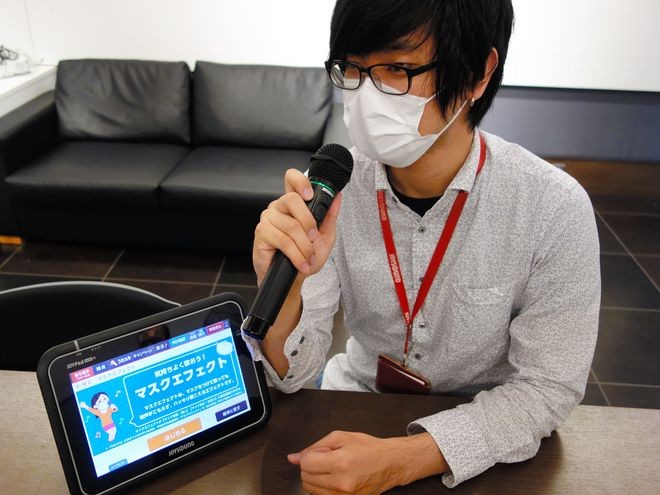 Customers can switch on the "mask effect" feature on the Joysound karaoke song-selection device, which makes the singer’s voice clearer when wearing a mask. (Kohei Kondo)

NAGOYA--Karaoke lovers singing the blues because their face masks muffle their voices now can reach for those high notes and find their true sound.

Xing Inc., a Nagoya-based subsidiary of Brother Industries Ltd., which operates a major karaoke chain under the Joysound brand, says it has come up with a solution.

And with the pandemic putting the karaoke industry in the throes of struggle like never before, the company intends to promote the new feature to turn the corner.

It introduced a new feature at about 110 Joysound-operated parlors nationwide in early July. A singer just needs to select the "mask effect" feature on the song-selection device screen.

When it is turned on, the singer’s voice sounds clear as a bell and their voice quickly fills the room.

The secret is how the effect adjusts mid- and high-pitched sounds.

The feature gives them a boost and makes other technical corrections when filtering sounds to make the singer’s voice sound natural, according to Tomomi Koyama, 27, who developed the feature.

Xing works on improving its karaoke systems by designing better settings and features to enhance the karaoke experience for customers, so Koyama leveraged the company's expertise when coming up with the fix for muffling masks.

Xing started to develop the mask effect in May when the coronavirus pandemic was worsening in Japan. It was forced to temporarily close company-owned karaoke parlors after the government declared a state of emergency.

Koyama and other staffers began designing the feature under the encouragement of company brass. The team sang about 100 songs, ranging from traditional "enka" tunes to modern pop songs, to ensure they were hitting the right sound.

"It turned out to produce the sounds we intended it to,” said Koyama. “We hope our customers feel safe and enjoy karaoke."

While the number of customers continues to decline when compared year on year, Koyama hopes that business will start to recover since now people can enjoy karaoke to their heart’s content even though they must wear masks.

It also promotes a service for teleworkers to book its karaoke rooms to utilize for office space, which it introduced before the pandemic began.