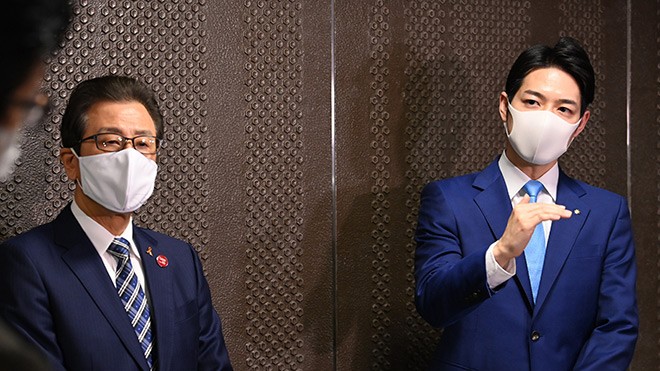 SAPPORO--The governor of Hokkaido and the mayor of Sapporo, the main northern island's capital, agreed to implement measures equivalent to stage 4 of the new coronavirus alert level for the city to help contain soaring cases of COVID-19.

The entire island, including Sapporo, will remain at the stage 3 designation under Hokkaido's original five-point scale that is in place.

But the Hokkaido and Sapporo city governments have decided to take strengthened anti-coronavirus measures for Sapporo.

The decision was made during emergency talks between Governor Naomichi Suzuki and Mayor Katsuhiro Akimoto on Nov. 16.

A formal announcement that urged residents to remain indoors as much as possible was announced Nov. 17. Residents living outside of Sapporo were also requested to refrain from visiting the city.

In situations where the risk of becoming infected is unavoidable, residents were asked to follow the requests unless it is absolutely urgent.

“Our health care system is bearing a much heavier burden due to the increase in infections, and I am very concerned about the situation,” Suzuki told reporters on Nov. 16.

The Hokkaido prefectural and Sapporo city governments are desperate to avoid a knock-on effect that damages the overall island economy while maintaining a stage 3 level for the entire area.

Another issue discussed was the “Go To Travel” subsidy campaign promoted by the central government to mitigate the impact on the national economy due to the health crisis.

Suzuki and Akimoto requested people living in other parts of Japan to refrain from visiting Sapporo “if the risk of infection is unavoidable.”

They offered specific examples of those unavoidable risks on Nov. 17, such as using facilities where anti-infection measures are not fully implemented or meeting in closed indoor settings for long periods.

With regard to the government's “Go To Eat” campaign, it was agreed that residents should be urged to eat out only in groups of four or less and to finish their meal within two hours.

Those measures are not mandatory.

The number of new COVID-19 cases has been surging in Hokkaido, a popular tourist destination, since late October.

(This article was written by Ichiro Matsuo, Toru Saito and Fumiko Yoshigaki.)