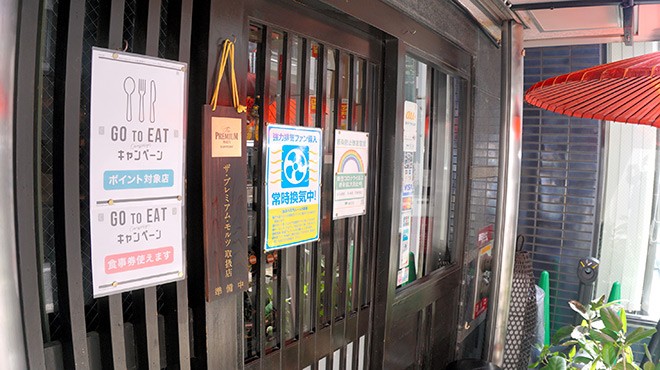 A sign says this restaurant in Tokyo’s Minato Ward is registered in the “Go To Eat” campaign on Oct. 12. (Shinya Takagi)

Prime Minister Yoshihide Suga urged governors in COVID-19 hotspots to limit the size of groups that use the “Go To Eat” campaign, which is designed to encourage more people to dine outside.

“I ask governors to consider excluding dining parties of five or more people, for example, from the Go To Eat campaign’s point and meal coupon programs,” Suga said at a Nov. 16 meeting of the government task force dealing with the novel coronavirus pandemic.

The governors of Hokkaido and Osaka Prefecture, where COVID-19 cases have been surging, have pleaded for limits in the government-subsidized campaign that is intended to support bars and restaurants hit hard by the pandemic.

The Ministry of Agriculture, Forestry and Fisheries said it would be desirable to implement the prime minister’s requested measures in areas with rising cases starting on Nov. 21, the first day of a three-day weekend.

Groups of five or more can still benefit from the campaign, but they will have to split up so that only up to four of them use one room or table. They could also use partitions to maintain a proper physical distance from each other, according to the ministry.

Suga’s request is based on the view of the government subcommittee consisting of infectious disease experts that dining in a group of five or more people raises the risk of infections, the ministry said.

One of the Go To Eat campaign’s programs that started in October rewards diners with points that they can later spend like cash at registered restaurants.

Parties of up to 10 people can receive the points per meal when they use 13 designated reservation websites.

The government set aside 61.6 billion yen ($589 million) for the program, but the budget will likely dry up soon because of a surge in reservations since late October. Most of the major booking websites have stopped accepting new reservations for the points program since Nov. 14, and the rest will likely follow suit within days.

However, 90 percent of the points awarded to users of the program have yet to be spent. The points can be used until March next year.

The government expects more people will use premium meal coupons offered under another program of the Go To Eat campaign from December, prompting its request to governors to consider imposing limits on group sizes.

The government maintains that its Go To programs, including the “Go To Travel” campaign aimed at revitalizing the struggling tourism industry, have not fueled the spread of the novel coronavirus.

“We do not believe the Go To programs themselves became sources of infections,” said Yasutoshi Nishimura, the state minister of economic revitalization who is also in charge of the government’s response to the pandemic.

Local governments in areas outside of major cities are also increasingly alarmed by the recent increase in new cases, forcing the central government to partially review the Go To programs.

Suga on Nov. 16 also announced plans to provide a 50-billion-yen subsidy to municipalities to financially support businesses that have complied with their requests to shorten operating hours to curb the spread of the virus.

The central government has earmarked 3 trillion yen in its budget for temporary subsidies to support local governments’ response to the pandemic, including bolstering their health care systems and maintaining employment.

The government will use some of the remaining budget funds to pay the 50-billion-yen subsidy. But the National Governors’ Association has said the planned subsidy amount is not enough.

(This article was written by Ayako Nakada and Shinya Takagi.)