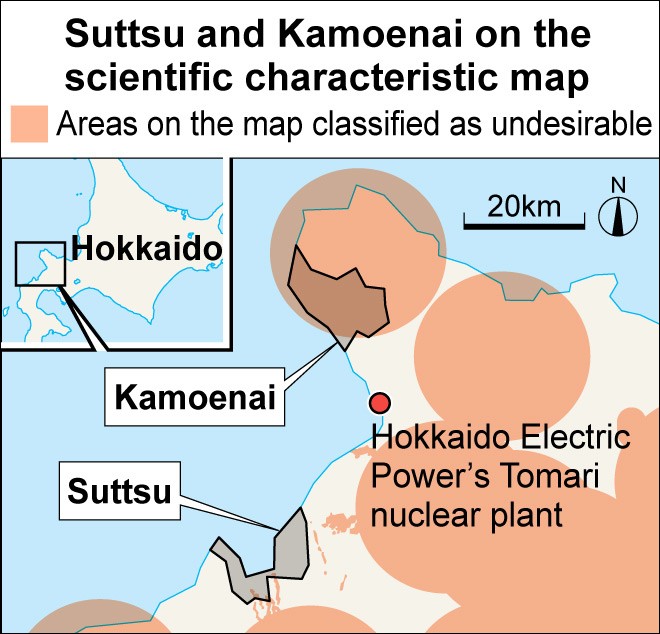 Economy ministry officials have finally started the long, multistage process toward building a final storage facility for highly radioactive nuclear waste, but they could face obstacles down the road from the Hokkaido governor.

In the first stage, government officials will examine documents and maps of seismic activity for about two years. It is the first time the government has reached this stage.

The actual selection process will be handled by the Nuclear Waste Management Organization of Japan (NUMO), which on Nov. 17 released plans for the first stage involving the two local governments.

NUMO in 2002 began asking municipalities around Japan to apply for consideration as final nuclear waste storage sites. The town of Toyo in Kochi Prefecture in 2007 became the first local government to apply. However, the town mayor made the decision without first consulting the Toyo assembly.

Local opposition in the town on the island of Shikoku was so fierce that a candidate opposed to the idea defeated the incumbent in the next election, and the application was withdrawn.

No other municipality expressed interest in NUMO’s proposal. So in 2017, the central government released a map of areas that were considered scientifically and geologically appropriate as sites for the final storage of nuclear waste.

As an enticement, the central government offered up to 2 billion yen ($19 million) in grants to applicant municipalities in the first stage.

NUMO officials are expected to tout the benefits to the municipalities in terms of new infrastructure and greater use of local materials.

The second stage will involve boring samples taken from underground, part of a four-year process to determine if the area meets general conditions to move to the third stage, in which a test facility will be constructed.

However, the process cannot move forward if the prefectural governor opposes the idea.

Hokkaido Governor Naomichi Suzuki on Nov. 17 released a statement saying he opposed the process, citing a Hokkaido ordinance that states that no nuclear waste should be brought onto the main northern island.

But the two local governments still applied for consideration because of the large government grants.

Suttsu has a population of about 2,900, and the town government’s revenues for fiscal 2018 were about 5.3 billion yen.

Kamoenai, with about 800 villagers, had revenues of about 2.1 billion yen.

Experts said the grants and the dialogue meetings are intended to convince local residents of the positive aspects of the project in hopes they overlook the fact that the nuclear waste to be buried in their backyard may take up to 100,000 years to reach safe radiation levels.

“The dialogue forum is effectively a way for local governments to get a taste for what the grants can provide and is intended to have the local community take a conciliatory stance toward the project,” said Koichi Hasegawa, a specially appointed professor of environmental sociology at Shokei Gakuin University in Natori, Miyagi Prefecture.

“The unsoundness of the approach cannot be denied because it is intended to pave the way for the second stage,” he said.

The scientific characteristic map released by the central government in 2017 classifies all areas into four colors. Areas near volcanoes or active faults are considered undesirable as candidate sites.

But NUMO has gone ahead with the process for Kamoenai despite the fact that the only desirable point on the map is at the southern tip of the village. The rest of the village is classified as undesirable because it lies within a 15-kilometer radius of a volcano.

While Suttsu has a much larger area classified as desirable, an active fault runs under the central part of the town. The map only includes active faults extending for at least 10 kilometers, so further studies in the town might turn up more undesirable areas.

(Yu Kotsubo contributed to this article.)