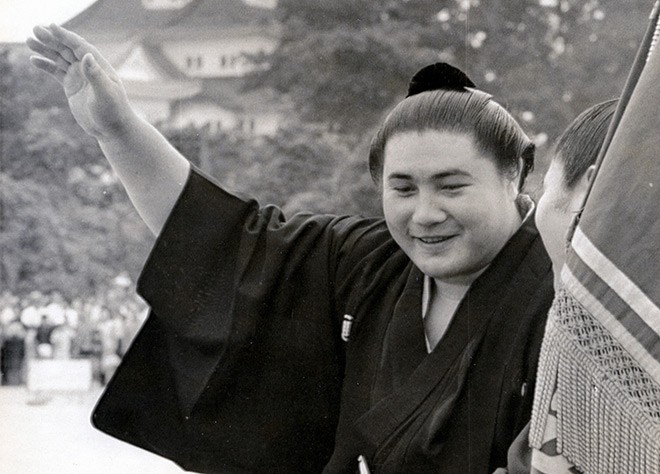 A shortage of craftsmen capable of creating the vital tools for producing the iconic hairdo sported by sumo wrestlers is threatening to sever the symbol of Japan's national sport at its very roots.

The “oicho-mage” topknot is symbolic of top-notch sumo wrestlers, but concerns are being raised about the future of the traditional methods used to produce the elaborate design resembling a gingko leaf.

The oicho topknots for those in the makuuchi and juryo divisions are crafted by “tokoyama” hairdressers. They use special hair oil to bring together the long strands of hair with paper twine close to the roots.

The “motoyui” twine is about the thickness of "somen" noodles but has to be strong enough to not break even during violent clashes between wrestlers.

But now there's only one craftsman left standing who makes it: Eisaku Kawase, 89, works out of Iida, Nagano Prefecture, and is carrying on a tradition passed down to him by his father and grandfather.

“When I watch sumo matches on TV, I'm more observant of the wrestlers’ head than the actual bout,” Kawase said. “It would be just terrible if the twine snapped off.”

The Iida region was a primary motoyui production area in the Edo Period (1603-1867) because of the “kozo” plant grown there.

Kozo fiber was used to make “washi” paper. The Iida motoyui became popular in the area now known as Tokyo because of its high quality.

But demand dropped sharply after the government in the early Meiji Era (1868-1912) ordered all males to sever their topknots and adopt a Western hairstyle.

With declining orders for samurai movies and TV dramas, about the only people now buying motoyui are sumo wrestlers and Kabuki actors.

As if things weren't dire enough, Kawase has now been robbed of his workplace by the COVID-19 pandemic. The commercial outlet where he had set up shop closed in spring.

Making motoyui requires a large space outdoors to apply glue to the paper and then dry the material in the sun. That process is repeated a number of times to produce the strong twine.

After discussing the matter with Matsubun, the wholesaler in Iida that directly sells the twine to the Japan Sumo Association, Kawase decided to stop making the motoyui.

Kawase said he was proud that the sumo association has continued to use his motoyui.

“We want to somehow preserve the Iida motoyui,” said 63-year-old Hirotaka Ihara, Matsubun's president. “But it is difficult for craftsmen to make a living by only producing it. We'll have to think about mechanizing the production process.”

Another company that sells motoyui to the sumo association has also stopped production, meaning the current inventory will be the last of the handmade motoyui.

Shimada Shoten in Tokyo’s Edogawa Ward is the only company in Japan that sells the special hair oil used by sumo wrestlers. With its characteristic aroma, the oil is a dead giveaway that a sumo wrestler is likely walking nearby.

The oil is made by mixing rapeseed oil, wax and a fragrance. Vanilla essence is said to be the most aromatic.

Yoji Shimada, 47, the company's current president, said it was difficult to make the special hair oil using machinery because of the delicate processes of getting the right temperature and stirring.

The company was established in 1965 by Shimada’s father, Akihiro, 83. Then, four or five shops in the Asakusa district alone handled the hair oil. But as demand for the traditional Japanese coiffure has declined, Shimada Shoten has become the only one still selling it.

Panic over COVID-19 has also hurt the company. Consumption of the oil crashed due to restrictions on practices by sumo wrestlers as well as the cancellation of the Summer Grand Sumo Tournament in May.

Shimada Shoten now only makes the oil for sumo wrestlers a few days every month.

Though Shimada said he wanted to continue selling the hair oil, he added he had no idea whether anyone would succeed him in the business.

“It's very difficult to continue (the company) by hiring people,” he said. “I'll have to think about what to do over the next 20 years.”

Akira Kato, 66, who as the tokoyama Tokomine led the 50 or so tokoyama in the sumo world, said technique allowed for creating the oicho topknot without using a large amount of hair oil. The motoyui, he said, was a key tool for the tokoyama.

When asked about the possibility of using machine-made motoyui, Kato turned to an analogy for making "mochi" rice cakes.

“Mochi made with a wooden mortar and pestle is much more sticky than machine-made mochi. I'm worried that motoyui made by machines might be weaker.”