After dark, maple leaves at famed Shiga temple are ablaze in color

Saikyoji temple in Otsu, Shiga Prefecture, is ablaze in autumn colors. Maple trees on the temple grounds are illuminated at night. (Chifumi Shinya) 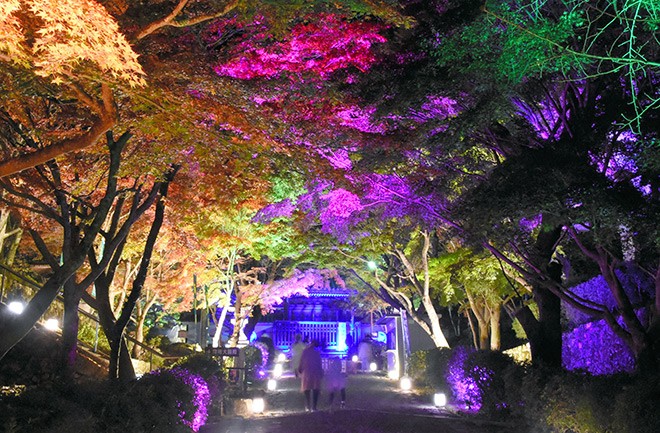 Maple trees on the grounds of Saikyoji temple in Otsu, Shiga Prefecture, are lit up in seven colors on Nov. 14. (Chifumi Shinya)

OTSU, Shiga Prefecture--Historic Saikyoji temple here is renowned for its picturesque autumn foliage, but this year a tunnel of maple trees offers a special touch, courtesy of a light show.

As the day ebbs, the red-leafed trees are lit up in seven colors.

Saikyoji, the general headquarters of the Tendai Shinsei sect, is also known as the family temple of Akechi Mitsuhide, a 16th century warlord who ordered the assassination of Oda Nobunaga, the military leader who unified half of the provinces in Japan under his rule.

To take advantage of the public’s growing interest in Mitsuhide and the temple, the Biwako Otsu Tourism Association decided to enhance the seasonal attraction to allow visitors to savor the maple trees in a different light.

With a special production of light and shadow, images of Japanese bellflower, which was the Mitsuhide’s family crest, and his “kabuto” (war headpiece) are projected onto the temple gates and walls of the Hondo main hall.

Mitsuhide, who was a castellan of nearby Sakamotojo castle, rebuilt the temple after it was burned to the ground by Nobunaga.

Mitsuhide ambushed Nobunaga in the Honnoji Incident, but eventually was defeated in battle by Toyotomi Hideyoshi, who succeeded Nobunaga and became shogun.

It is said that Mitsuhide’s father-in-law built a tomb for Mitsuhide and the clan and then fell on his sword in front of it.

Followers of Saikyoji temple are taught to strictly adhere to a simple lifestyle and constantly recite a Buddhist prayer.

“I hope visitors who walk through the maple tree tunnel will offer a prayer and think about why Mitsuhide felt such a personal attachment to the stoic teachings of Saikyoji,” said temple resident Ryoju Maesaka.