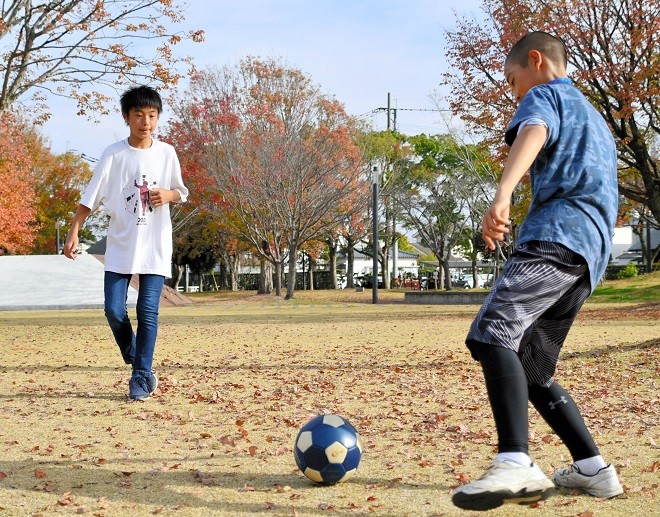 Children play with a ball in Saga on Nov. 18 on an unseasonably warm day across Japan. (Daisuke Matsuoka)

A play within a play adds color to the narrative. In "The Flying Classroom," a 1933 novel for children by Erich Kastner (1899-1974), boys at a German boarding school rehearse a play written by one of them.

It is a cheerful play about the entire class traveling the world on a plane and taking lessons at various historical sites.

At Mount Vesuvius in Italy, the boys gaze at the volcano's blazing flames while learning about the collapse of an ancient civilization. In Egypt, they alight on a pyramid and meet a mummy.

The play is performed on Christmas Day to everyone's delight.

In our "tale" of the changing seasons, the scenario is that we are heading into winter now. However, the unseasonable warmth of the last few days felt like a play within a play.

I wonder if someone was thoughtful enough to let us enjoy this pleasant episode that's longer than usual.

Author Toson Shimazaki (1872-1943), who depicted his life in the Komoro district of Shinshu (present-day Nagano Prefecture) in "Chikumagawa no Sukecchi" (Sketches of the Chikumagawa River), cherished the warm "koharu" interlude in winter.

"Even up in the mountains, the season doesn't sink into the bottom of winter all at once," he wrote. The koharubiyori (literally, "small spring weather") occurs when autumn transitions into winter and it “is one of the most unforgettable and comfortable times in this region," he said.

But even though the blazing sun I walked under felt as if we were having "konatsu" (small summer) weather, it was obvious from the roadside trees that winter is coming. Most were already denuded of leaves, and the red flowers of sasanqua were as gorgeous as they should be around this season.

According to the Japan Weather Association, one feature of winter this year is that the days will grow colder more slowly than usual.

And that is somewhat comforting to hear in these unsettling times.