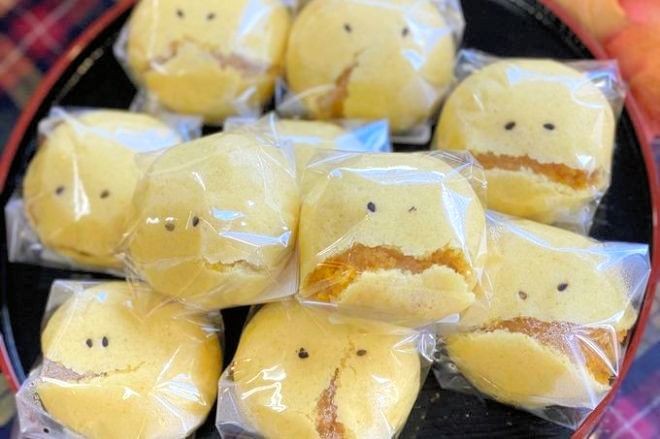 Sesame seeds give eyes to these dumplings filled with pumpkin paste. (Provided by Mutsumian)

NANYO, Yamagata Prefecture--A couple of sesame seeds and a creative wife turned a baker’s failure into a rousing success for Halloween.

In October, Mikio Kanno, 33, a director of the Mutsumian traditional Japanese-style confectionery store in the Kunugizuka district here, made around 40 steamed “manju” buns filled with pumpkin paste. But the skins of many of the dumplings had ruptured, likely because the filling was too soft.

He thought about sharing the broken buns within his family or giving them to neighbors.

His wife, a graduate of the Tohoku University of Art and Design who is responsible for the shop’s publicity and other tasks, suggested that he add eyes above the mouth-like cracks. (She requested anonymity.)

The limited-time product hit the shelves shortly before Halloween.

When an image of the broken manju was posted on the store’s official Twitter account (@mutsumian63), many users praised the originality of the couple.

One reply said the improvement was “a good example of changing the point of view,” while another stated the “idea converted a lack of uniformity into value.”

The dumplings were nearly sold out at a price of 120 yen ($1.15) each, the same as the successfully cooked pumpkin buns.

One customer who saw the shop’s Twitter post came all the way from neighboring Miyagi Prefecture to buy the dumplings, according to Mutsumian.

“The experience is precious because it allowed me to become aware of how to add value to products,” said Mikio, who also expressed his appreciation to his wife for coming up with the idea.

“The manju are not much more than a failure,” Mikio said humbly. “People’s interest in the food waste issue helped attract so much attention.”