EDITORIAL: IOC, Japan should ease push for Olympics during pandemic 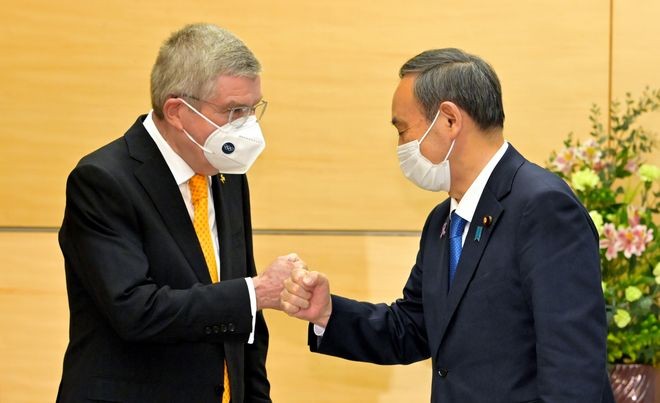 Japan has entered a new, alarming phase of a rapid, nationwide spread of COVID-19 cases.

The number of serious cases in the country is rising by the day. The Tokyo metropolitan government has raised its alert to the highest level.

The situation is even more serious in Western countries.

Just as the world is shrouded in anxiety about the future development of the coronavirus crisis, Thomas Bach, president of the International Olympic Committee, visited Japan on a four-day itinerary through Nov. 18.

He attended a set of events and functions, including talks with officials and tours of facilities for the Tokyo Olympic and Paralympic Games, which were scheduled for this past summer but were postponed because of the pandemic.

Bach's visit left an indescribable sense of discomfort, as it revealed the wide gap between the perceptions of the officials and the public.

Prime Minister Yoshihide Suga said, for example, that he is determined to go ahead with the Olympic and Paralympic Games as planned next summer as “proof of humanity’s triumph over the virus.” Bach chimed in to say he shares Suga’s determination.

Showing through their remarks was a desire, on Suga’s part, to draw on the Olympic and Paralympic Games as a means for maintaining, and boosting public support for, his administration.

In addition, regarding Bach, he has no option of withdrawing support for the Games because he is running for another term as IOC president in next spring’s election.

The very act of showing such eagerness to proceed should not be reproached. However, when leaders are too intent on doing something, that could make it difficult to backtrack on or modify its course.

What the leaders have forgotten about is the need to assess the situation coolheadedly and adapt flexibly to circumstances.

In their rush toward a foregone conclusion of proceeding, they may lose the support of the people, who are vital to ensuring a successful Olympics and Paralympics.

We are, certainly, beginning to see a ray of hope in COVID-19 vaccine development efforts. International events have also been held for a number of sports. These signs of optimism may account for Bach's and Suga’s confident statements.

However, as to when vaccines will become available, of what quality they will be and how much will be available, we have no definite answers yet in sight.

The sporting events being held are still accumulating insight and experience under stringent requirements, such as no spectators being admitted in many cases.

These events should not be equated with the Olympic and Paralympic Games, which involve athletes coming together from more than 200 countries and regions of the world. This spectacle involves a wide array of competitions to be held intensively during a short period at a set of geographically distributed venues.

During the latest talks, it emerged that Japanese and IOC officials have differing views on some of these issues. The question of who will pay the additional costs of the postponement also remains unsettled.

Officials may deplore a lack of public enthusiasm for the Olympic and Paralympic Games, but that comes as no surprise, given that efforts to fill those and other gaps have been put on the back burner.

The most urgent task for the concerned officials is to work out ideas on, and the substance of, infection control measures and to have a shared understanding of the matter.

A consortium of Japan’s central government, Tokyo’s metropolitan government and the Tokyo Organizing Committee of the Olympic and Paralympic Games has rooted out points of contention during the meetings it has held with experts, but it has yet to work out specific guidelines.

The central government has come up with a proposal for allowing spectators arriving from overseas to attend the Olympic and Paralympic Games to forgo a quarantine period and use public transportation following their entry into Japan.

It remains to be seen if the public will accept such a setup. The central government will have to provide careful explanations on the proposal and even review it as the need arises.

There still remains a mountain of problems to be answered before the public will have more understanding of, and more empathy for, proceeding with the Olympic and Paralympic Games.