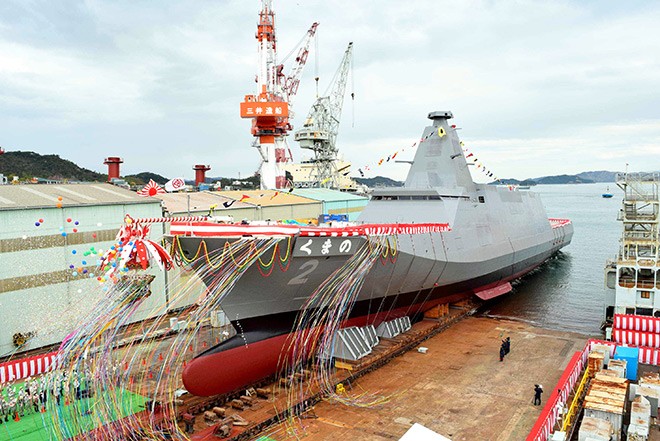 A launching ceremony is held on Nov. 19 at the shipbuilding yard in Tamano, Okayama Prefecture, for the Kumano destroyer. (Miyuki Kanno)

Japan launched a new type of destroyer on Nov. 19 for sea trials that is not only slimmer and far less expensive than other warships of its class, but also designed to provide a healthy work-life balance for crew members.

The ceremony attended by top brass of the Maritime Self-Defense Force was held at a shipbuilding plant in Tamano, Okayama Prefecture.

With an overall length of 133 meters and a standard displacement of 3,900 tons, the Kumano cost 46 billion yen ($443 million) to build, about two-thirds that of a conventional destroyer. It is capable of performing multiple functions, including mine-sweeping.

The smaller size means that a crew of only about 90 is required, about half the size of other destroyers and one-third the crew size of an Aegis-class warship.

The switch to sleeker vessels was prompted in part by difficulties the MSDF had faced in recruiting personnel. The smaller crew size will enable the MSDF to operate destroyers with far fewer personnel.

Each of the new warships boasts a similar design to allow for a crew rotation system to be implemented.

In the long term, four crews of 90 members each will be formed so that three destroyers are manned at any one time. When those destroyers are deployed, the one out to sea the longest will return to its home port to enable the fourth crew that had been relaxing at the base to take over, allowing rest and recreation for the incoming crew.

Destroyers in the past were all constructed with specific interior layouts, but that meant only the crew familiar with the vessel’s characteristics could work on the ship. This created difficulties in allowing crew members to take time off.

The new type of destroyer will have a similar interior layout to allow different crews to rotate work shifts.

“While allowing personnel to rest, the destroyer can continue to be operated,” a high-ranking MSDF officer noted.

Future plans call for having half of the MSDF’s destroyer fleet made up of the smaller type.

But there are drawbacks.

For one thing, the vessel will not be fully equipped with weapons, meaning it will not be at the forefront of maritime defense but only serve a supplementary role to other better equipped destroyers.

Criticism arose at the planning stage about procuring a ship ill-suited for combat.

But the new design was chosen to provide greater surveillance of Chinese vessels intruding into waters around Japan.

The Aegis destroyers would normally be tasked with patrolling the East China Sea to check on Chinese ships.

Those warships now play a major role in the ballistic missile defense system against North Korea. The Aegis destroyers will assume a greater role now that the government has scrapped plans to deploy a land-based Aegis Ashore system.

The new class of destroyer is expected to fill the surveillance vacuum created by assigning Aegis warships to other tasks.

The Kumano will be formally commissioned in March 2022 after crew training and equipment checks are completed.

Under the Medium-Term Defense Program for the period between fiscal 2019 and fiscal 2023, 10 new destroyers are planned for construction.