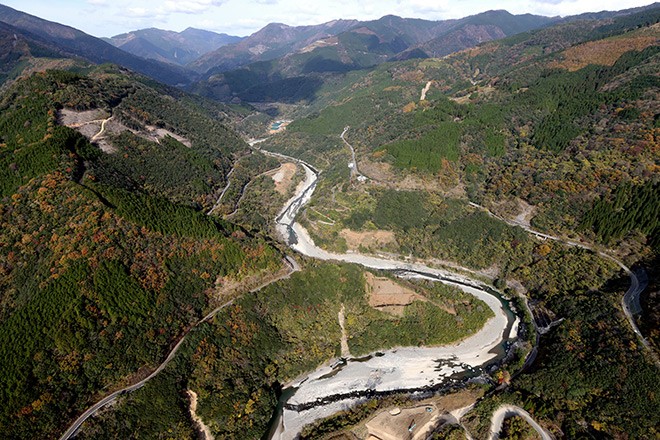 The planned construction site for the Kawabegawa dam in Kumamoto Prefecture on Nov. 18 (Eiji Hori)

Kumamoto Governor Ikuo Kabashima on Nov. 19 announced that he has approved construction of a flood-control dam on the Kawabegawa river, a tributary of the Kumagawa river.

Long an opponent of the central government’s existing dam plan for the area, Kabashima said he will ask Tokyo to build a different type of dam—a flood-retention one—in light of the disaster caused by the record-breaking rainfall that swamped the southern part of Kumamoto Prefecture in July.

“I will make the request to the central government for a new flood-retention dam to protect residents’ lives and the fresh river that is a local treasure,” Kabashima said at the prefectural assembly council.

He plans to discuss the idea with land minister Kazuyoshi Akaba.

However, he did not give details about the size and the structure of the new dam.

And although the governor said a flood-retention dam “can be environment-friendly to the utmost,” experts were quick to point out that such dams can still cause environmental damage.

Kabashima in 2008 suspended the central government’s existing project to build a reservoir-style dam on the Kawabegawa river, citing, among other things, the expected negative impact on the environment.

He had since been considering flood-control measures without relying on a dam.

But he changed his view after more than 6,000 houses were inundated when the Kumagawa river overflowed in torrential rain in July. Sixty-five people in the prefecture died in the downpour, including 50 whose deaths were believed to have been caused directly by the flooding.

Since October, Kabashima has held 30 meetings with residents who live near the river and listened to the opinions of 467 people about flood-control measures as well as preserving the natural river system.

The governor said he will ask the central government to scrap its reservoir-type dam project and instead build a dam that stores water only during heavy rain and allows the river water to flow in normal times.

He also said he will ask the central government to conduct an environment assessment for the new dam plan, which was not done for the current project.

The existing Kawabegawa dam plan would store water for power generation and domestic water supply. Such reservoir-style dams affect the surrounding environment, such as worsening the quality of water trapped in a dam lake that forms.

Discharge outlets in a flood-retention dam allow water to continue flowing in normal times, thereby maintaining water quality and preventing a lake from being created. This type of dam is designed to stop river water during heavy rain to prevent flooding in downstream areas.

A land ministry official touted the benefits of flood-retention dams.

“Almost all of the natural environment can be maintained,” the official said.

However, Hirotake Imamoto, an honorary professor at Kyoto University who specializes in environmental issues concerning dams, raised doubts on that assessment.

He studied areas around the flood-retention Masudagawa dam in Shimane Prefecture and found that soil had piled up in the upstream areas.

He said that if the amount of soil naturally flowing downstream is reduced, it might affect the biology of fish that lay eggs in the sand.

“It is wrong to think that a flood-retention dam affects the environment less than a reservoir-style dam,” Imamoto said. “We can take measures to prevent flooding without depending on dams by, for example, excavating piled-up soil to increase water-flow capacity.”

“It is questionable if the current style of flood-retention dams is environment-friendly enough,” the official said. “We need to ask for more advanced technology to protect the Kawabegawa river.”

In 1966, the then Construction Ministry announced plans for the Kawabegawa dam, one of the largest dam projects in Kyushu, after huge floods overwhelmed the Kumagawa river system.

Kabashima announced a suspension of the project in 2008 after residents voiced their opposition.

The following year, the central government led by the Democratic Party of Japan froze the dam project.

Since then, the central, prefectural and local governments near the river have discussed alternative flood-control measures, such as enlarging the river channel to increase water-flow capacity and raising the embankments.

But the dam plan has never been realized largely because of its long construction schedule ranging from 45 to 200 years and its huge costs ranging from 280 billion yen ($2.7 billion) to 1.2 trillion yen.

In October, the central government said that if the Kawabegawa dam existed, the flooded areas, including the central part of Hitoyoshi city near the center point of the Kumagawa river, would have been reduced by “60 percent.”

The central, prefectural and local governments plan to decide on a new flood-prevention strategy within fiscal 2020, based on a policy of using overall community efforts and considering measures discussed before the July disaster.

(This article was written by Hideki Ito and Takahiro Takenouchi.)