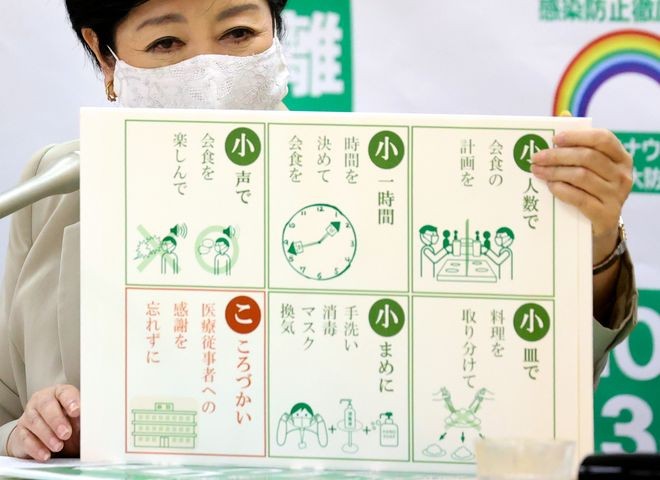 Tokyo Governor Yuriko Koike uses a news conference on Nov. 19 to display a panel offering tips to prevent infection from the new coronavirus while dining. (The Asahi Shimbun)

Every society has individuals who offer professional instruction in offbeat skills, and "Akubi Shinan" (Yawning instructor) is a traditional "rakugo" (coming story-telling) number about a man who opens a studio to teach people how to yawn.

The lessons vary from season to season. In autumn, his disciples learn to yawn by gazing at the moon, while in winter they sit around a "kotatsu" (quilt-covered low table that doubles as a heater).

For beginners, the lesson takes the form of a boat ride in summer.

The rakugo artist would sway his body to simulate being aboard a bobbing craft and utter this standard line: "Hey, boatman, will you go upstream a bit?" And he would go on, "Boating is nice, but doing this all day gets so, so boring."

That is the cue for a big yawn, but novices who try to force it usually end up pulling a lame one.

We now have our political leaders "instructing" us on how to dine out while the COVID-19 pandemic rages. While I wouldn't go so far as to call them as silly as the yawn instructor of rakugo, they still make me question if they really understand the enormity of the health crisis.

And health minister Norihisa Tamura on Nov. 20 gave a demonstration before TV cameras on how to use a special face shield designed to be worn when dining out.

These politicos obviously think they are conveying an important message to the public. But whatever they have in mind could not be more divorced from the sense of crisis felt by health care professionals.

In an emergency news conference, the Tokyo Medical Association called for the temporary suspension of the government's "Go To Travel" campaign, asserting that not doing so would inevitably lead to the collapse of the health care system.

Keeping the economy running sounds reasonable in itself, but the reality is that the "Go To" campaigns are effectively undoing the efforts being made to prevent infections.

The government would be making a far more meaningful statement by halting these campaigns now.

But if those politicians intend to keep focusing on issuing instructions on how the public should dine in groups, can we really entrust our safety to them?

This makes me sigh, not yawn.