EDITORIAL: Dam alone could not have averted flooding of Kumagawa river 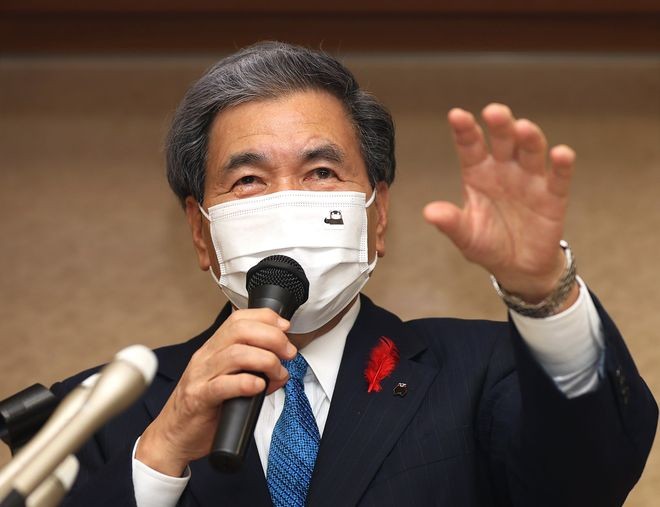 Kumamoto Governor Ikuo Kabashima holds a news conference in Kumamoto on Nov. 19 after he approved construction of a dam on the Kawabegawa river. (The Asahi Shimbun)

Kumamoto Governor Ikuo Kabashima announced Nov. 19 he has approved a new plan to construct a flood-control dam on the Kawabegawa river, a tributary of the Kumagawa river which runs through southern parts of the southern prefecture. This is nothing less than an about-face on his opposition to the decades-old project plan.

In 2008, Kabashima blocked the central government’s plan to build a dam on the river, which was first announced in the 1960s, and demanded it be scrapped.

The prefectural government has been working to map out a flood control strategy that does not rely on a dam in line with its policy of putting priority on protecting the natural environment of the Kumagawa, known as one of the clearest rivers in Japan.

But the local government failed to develop an effective water-control strategy, as tragically attested by the massive flooding of the Kumagawa river due to torrential rains in July, which killed more than five dozen people. The disaster forced the governor to rethink the prefecture’s approach to flood control.

Kabashima has held 30 meetings with local residents living in areas along the river to hear their views and opinions.

“Public opinion (about the issue) has changed significantly since 2008,” he said. “We need to protect both people’s lives and the clear river.” His remarks indicate the decision was a harsh one.

Still, he should be held responsible for the prefectural administration’s failure to devise a workable plan to prevent flooding during the 12 long years he has been in office.

During talks between the central government and the local administrations concerned, a range of ideas was considered, including river channel deepening to allow more water to flow and raising the banks. But none of them materialized as it became clear that the work involved would take too much time and money.

It should be asked whether this policy fiasco was due to a lack of a realistic, incremental approach based on a series of small projects that would take only a few years. The question concerns the basic policy posture of administration.

Kabashima has said he will ask the central government to scrap its blueprint for constructing a reservoir-type, multipurpose dam, to be used for generating power, supplying water for agriculture and other purposes, and instead build a dam designed to store water only during heavy rain and allow the river water to flow in normal times.

His request is aimed at limiting the environmental impact of the envisioned Kawabegawa dam.

But there are only five of the kind of dams proposed by Kabashima across the nation that are supervised by the infrastructure ministry. They account for a mere 1 percent of the total. As a result, the actual environmental benefits of such dams are unclear.

Since no decision has been made with regard to such key details of the plan as the size of the dam, the time required for construction and the total cost, some experts say the entire process of building the dam, including the required environment impact assessment, would take more than a decade.

If construction of a dam is considered as a given in the new policy efforts for flood control, the undertaking could end up as another major policy blunder.

After analyzing the factors that caused the Kumagawa river flooding disaster this summer, the central government acknowledged that the originally planned dam could not have stopped all the damage, while claiming it would have reduced the total area of flooding by as much as 60 percent in some parts of the affected region.

The prefectural government plans to work with the central government and the municipalities involved to work out a comprehensive package of flood-control civil engineering projects other than a dam by the end of March.

It should go without saying that it is vital to take steps to improve "soft" measures, such as developing better emergency evacuation plans and reviewing how land in areas along the river is used.

First of all, the responses to the disaster should be scrutinized and assessed.

There are many questions that remain to be answered, such as whether local governments acted appropriately in providing evacuation information and making other responses and why a care facility for the elderly suffered a high casualty rate despite its repeated evacuation exercises.

There are still many local residents opposed to the construction of the Kawabegawa river dam. The governor plans to create a system to monitor and check the direction of the dam project and its progress that will involve not only the prefectural and municipal governments but also local residents.

The system should be designed to ensure meticulous explanations and flexible responses to diverse views and opinions.