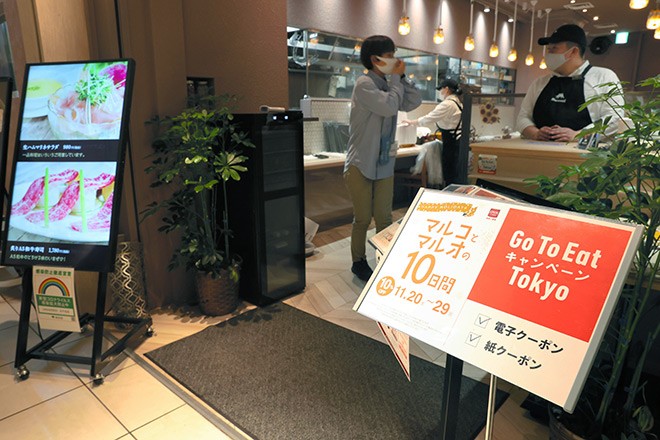 A sign at the entrance of this Tokyo restaurants says Go To Eat coupons can be used there. (Wataru Sekita)

Nine prefectures grappling with an upsurge in new coronavirus cases will place limits on the number of people who can dine together under the central government's Go To Eat economic stimulus campaign.

The government had asked prefectural authorities to consider exempting parties of five or more people from the campaign designed to encourage people to eat out using the Go To Eat campaign’s points and meal coupons over fears that large parties held a higher risk of becoming infected.

The farm ministry, which has jurisdiction over the Go To Eat campaign, asked prefectural governments what measures were being taken and released its findings on Nov. 20.

The nine prefectures that will implement restrictions on party size from Nov. 21 and beyond were Hokkaido, Saitama, Chiba, Tokyo, Aichi, Kyoto, Osaka, Hyogo and Okinawa.

Osaka was the only prefecture that will exempt parties of five or more from the Go To Eat campaign. Children and care providers are not counted as part of a party.

The other eight prefectures said units of four or fewer people could take part. That meant that large parties were possible as long as dividers were set up on tables to break up the party into groups of four or less. In those eight prefectures, children and care providers will not be counted as part of a group.

In Hokkaido, children were defined as those of preschool age.

All the prefectures made no restrictions on party size for families, but Hokkaido, Saitama, Chiba, Tokyo and Okinawa placed the condition that the family members were all living under the same roof.

A farm ministry official said restaurants would be obliged to accept groups that contend they are all one family without the need for a strict check of IDs.

Kanagawa prefectural authorities decided Nov. 20 to temporarily suspend sales of meal coupons that can be used at restaurants in the prefecture. The coupons allow for the consumption of meals that cost more than the money paid for the coupon. Sales will be stopped from Nov. 25, but residents who have already purchased coupons can continue to use them.

The Kanagawa prefectural government will decide when to resume sales after monitoring COVID-19 numbers in the prefecture lying just west of Tokyo.