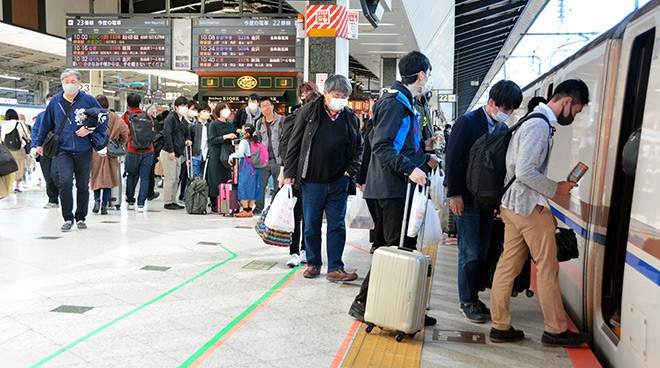 Passengers board a Shinkansen bullet train at JR Tokyo Station on the morning of Nov. 21. (Momoko Ikegami)

Train stations and expressways were heavily congested Nov. 21, the start of a three-day weekend, even as records were being broken on daily new cases of COVID-19.

Hyogo and Chiba prefectures reported record figures of 153 and 109, respectively.

One family of five was waiting for a train to take them to Hakodate in Hokkaido, the main northern island, which is witnessing a sharp increase in new coronavirus infections with the colder weather.

“It would have been a waste to have to pay cancellation fees and we decided to go ahead with the trip after having a family discussion,” said the woman in her 40s traveling with her husband, two children and mother.

She also said they would not forget to wear face masks and disinfect their hands while making the most out of their trip.

Government officials were to meet later Nov. 21 to discuss whether to revise the Go To Travel tourism promotion campaign.

The woman’s husband said the government was slow in acting if it intended to make a decision after the three-day weekend had already started.

A 25-year-old woman from Chiba city was traveling alone to Sendai, the capital of Miyagi Prefecture in northern Japan.

“I would have canceled if I had planned to go to Hokkaido or Osaka, but I felt Miyagi was still rather safe right now,” she said, adding that said she would be vigilant about washing her hands and picking restaurants where there were few customers.

One 51-year-old owner of an information technology company in Nagoya switched bullet trains at Tokyo Station for a business trip to Niigata.

“I made the plans after (the second wave of infections) had receded, so I could not cancel the trip now,” he said. He added that he would not be planning other business trips in the near future.

The Japan Road Traffic Information Center reported traffic backups extending for between 16 and 26 kilometers on major expressways in western and eastern Japan as of 10:30 a.m. on Nov. 21.

(Kazuyuki Ito and Momoko Ikegami contributed to this article.)