Mural of Megumi Yokota in Syria shows solidarity over abductions

Anti-government activists paint a mural of Megumi Yokota and her father, Shigeru, in Binnish of the Idlib Governorate in northwestern Syria. (Video footage taken by Muhammad Najdat Haj Kadour) 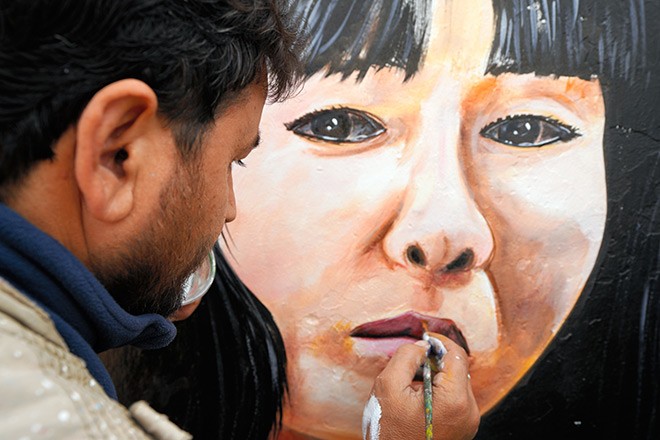 A Syrian artist works on a mural of Megumi Yokota in Binnish of the Idlib Governorate in northwestern Syria. (Muhammad Najdat Haj Kadour)

To raise awareness and show solidarity, a mural of Japanese abductee Megumi Yokota was completed in war-torn Syria where abductions have been carried out by government security officials.

The mural on a bombed-out home was finished on Nov. 15, 43 years to the day when the 13-year-old junior high school student was abducted by North Korean agents.

Alongside a mural of Megumi was one of her late father, Shigeru, who died on June 5 at age 87.

The paintings were in part intended to raise awareness among Japanese about mass abductions in Syria, especially in areas where anti-government activism is prominent.

A U.N. investigative committee has found that security agencies within the Syrian government of President Bashar Assad have abducted large numbers of citizens.

One of the activists who participated in the mural painting said, “We learned that a child had been abducted in Japan so we wanted to express a feeling of solidarity. We hope the Japanese will also learn about the terrible situation in Syria.”

The mural was created in Binnish in the Idlib Governorate in northwestern Syria, a stronghold for anti-government forces. A home bombed by government troops was chosen as the site for the mural.

Photos sent to the activists from a support group in Japan were used in painting the mural.

Icchiku Yamada, who heads a nonprofit organization seeking to improve the human rights situation in Syria, staged a hunger strike in late October in front of the Russian Embassy in Berlin. Yamada, a graduate student at the University of Tokyo, was protesting the Russian government’s support of the Assad regime and calling for the release of missing Syrians.

News of the hunger strike reached Syria, which led to the decision to create the mural with the increased interest in Japan among Syrians.

The activists have shown solidarity with other victims of crime in the past.

A mural was painted in Binnish of George Floyd, who was choked to death by a police officer in Minneapolis in May and became a global symbol of racism toward African Americans. That mural was intended to show solidarity with the Black Lives Matter movement.