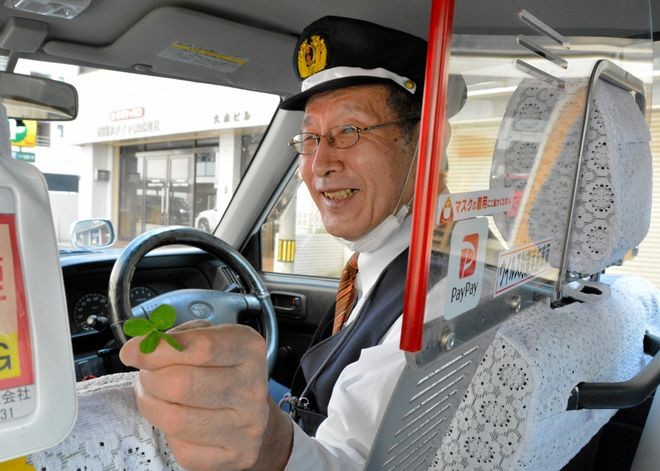 FUKUOKA--In a corner of the parking lot where his taxi gets disinfected three times daily against the novel coronavirus, the 69-year-old taxi driver squats on the ground, scouring it for signs of good luck.

This is break time for Kenji Tsutsui, who, though he started picking four-leaf clovers to give to his passengers about seven years ago, is finding he gets special thanks for handing them out these days amid the doom and gloom of the COVID-19 pandemic.

When he stops by at parks for a brief break or finds spots covered with vegetation, he crouches down for 10 to 20 minutes to search for clovers, sifting through the grass with his hands. The lot of the company where he has his vehicle disinfected is often a gold mine for them.

The pandemic, which has crushed sales for many businesses, has also battered Iikura Taxi Co., whose cabs Tsutsui drives.

Many of his customers have looked down in the dumps in recent months, the driver observed.

Hoping to brighten their mood even if only slightly, Tsutsui has been handing them the four-leaf clovers he has handpicked.

The reporter was one such lucky customer. On one weekday, I hopped in his cab as it happened to be passing by my place.

Tsutsui suddenly thrust a four-leaf clover at me when the taxi stopped at a traffic light, saying, "Please take it, if you like it."

The clover looked freshly picked, and I couldn't help asking how he got it.

"I found it," he said smiling, not turning his head.

Tsutsui first started giving clovers to his passengers just because he "thought they might be pleased," he said.

When he chanced upon lucky clovers in parking lots, parks and elsewhere, he used to stash them under the taxi's parking brake.

Tsutsui's earnings from fares have plummeted since March due to the pandemic. Some days he earns only half of what he used to. His conversations with passengers tend to be about the coronavirus, making the atmosphere inside the taxi somber.

To try and change that, he ramped up his clover hunting efforts. Before, he would just pick some if he happened to stumble across them, but now he actively hunts for clovers.

Still, finding them is easier than one might expect, he said.

"You can't find them when you get serious. When I take it easy and relax, I find them for some reason," Tsutsui said as he collected about 10 clovers within minutes.

Tsutsui said he remembers the happy looks on many passengers' faces when he gave them the clovers.

A young woman accepted all 20 of his clovers with a grin when Tsutsui told her they were all hers if she wanted them.

His ears were greeted with an emphatic "Yes!" from one child, who Tsutsui asked if they wanted a clover.

There was also an elderly woman who said something good might happen to her as she received a clover that sported a few dew drops.

Recently, though, he's having a little trouble finding four-leaf clovers, seeing only five- and six-leaf ones instead.

"There might be someone who is collecting four-leaf clovers before I find them. I can understand it because it feels good when you see them," Tsutsui said. "I want to keep giving them as long as I can find them."