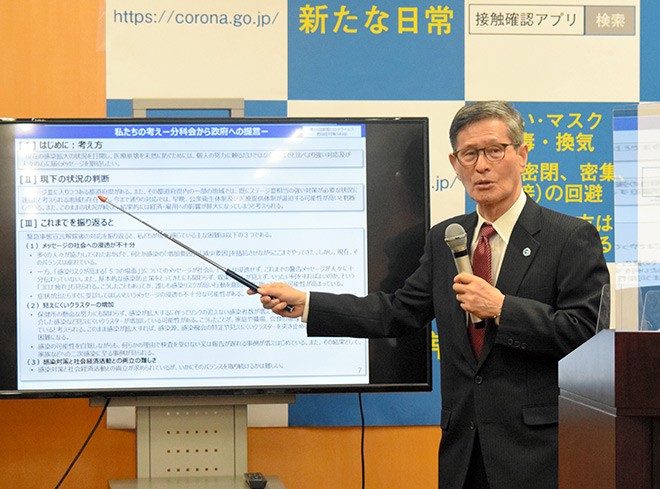 Shigeru Omi, chairman of the government panel of experts dealing with the pandemic, at a Nov. 20 news conference (Naoyuki Himeno)

Japan’s death toll from the novel coronavirus exceeded 2,000 on Nov. 22, as daily fatality numbers continued to increase with the third wave of infections hammering various parts of the country.

Three COVID-19 deaths were confirmed in Hokkaido, while Tokyo, Saitama, Kanagawa and Aichi prefectures each reported one death.

The daily count brought the nation’s cumulative total of COVID-19 deaths to 2,001 as of 9 p.m. that day. The figure includes fatalities from the Diamond Princess cruise ship that was quarantined at Yokohama Port in February.

More than 100 people have died of the disease in both Aichi and Fukuoka prefectures.

At least one death has been confirmed in 42 of Japan’s 47 prefectures.

According to a health ministry survey compiled on Nov. 18, 59 percent of 1,857 COVID-19 deaths were people aged 80 or older, while those in their 70s accounted for 26 percent of the fatalities.

The overall death rate among those infected was 1.5 percent, down 2.9 points from a ministry survey compiled on July 15, when the cumulative number of deaths was approaching 1,000.

However, sharp increases in the number of infections and COVID-19 deaths have recently been reported. On many days in November, more than 10 people were confirmed dead from the virus.

On Nov. 22, 2,168 new COVID-19 cases nationwide were confirmed as of 9 p.m., the fifth consecutive day the daily count exceeded 2,000. The number was also the largest for a Sunday.

Osaka led all prefectures in the number of new cases, reporting 490 for the fourth straight daily record high. Tokyo confirmed 391 new infections, while Hokkaido had 245.

According to a count by The Asahi Shimbun, an average of 10.79 people per 100,000 nationwide were newly infected during the week until Nov. 21, an increase from 7.59 the previous week.

The latest virus surge has been noticeable in certain areas. In Shizuoka Prefecture, the infection rate per 100,000 people was 8.73, 2.6 times more than the previous week, while in Ibaraki Prefecture, the rate was 9.06, up by 1.8 times.

In Tokyo and six prefectures, the number surpassed the nationwide average. Hokkaido led with 31.10, followed by Osaka with 22.75, Tokyo with 20.26 and Okinawa with 18.79.