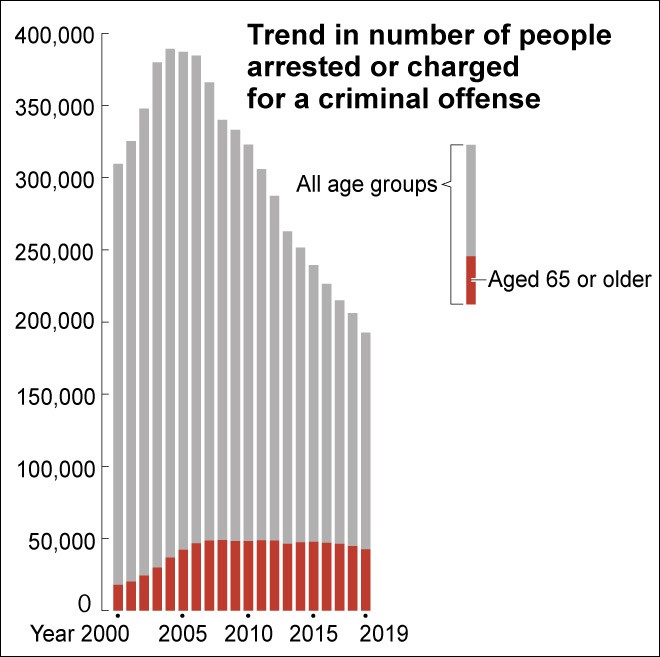 Theft cases involving people aged 65 or older, along with drug-related charges, were the most noticeable crime trends in 2019, according to a Justice Ministry white paper on Nov. 24.

Of the total cases, those aged 65 or older accounted for a record 22 percent.

Among female offenders, 33.7 percent were 65 or older. Ninety percent of them were arrested or charged in theft cases, such as shoplifting.

The report also noted that repeat offenders accounted for 48.8 percent of all the people charged, tying the previous year’s record.

The number of crimes recorded nationwide in 2019 came to 748,559, the lowest figure in the postwar period, reflecting a downturn trend for 17 consecutive years.

Of the 42,463 people arrested or charged in that age bracket, more than 70 percent were aged 70 or older.

Seventy percent of the crimes committed by older people involved theft. But among all age groups, theft accounted for slightly less than 50 percent of all cases.

Among female offenders aged 65 or older, 75 percent were arrested or charged for shoplifting. Ninety percent of cases involved theft charges, including shoplifting.

The ministry noted in the report that the nation's rapidly aging population was a factor.

The ministry expressed concern about an upward trend in drug-related crimes.

It noted that repeat adult offenders accounted for 66.9 percent of all cases involving stimulant drugs.

However, the number of people arrested or charged for a crime involving marijuana is rising. The figure for 2019 was 4,570, the first time it has exceeded 4,000.

The report included results of a survey of 699 male and female prison inmates with an average age of 43.5 who said they had used stimulant drugs.

Their average age for first trying out drugs was 18.7.

Over 90 percent of those who have used stimulant drugs said they had been on drugs for more than five years.

Both rates were higher among repeat offenders than first-time offenders.

The ministry said it will take measures based on the white paper's findings.