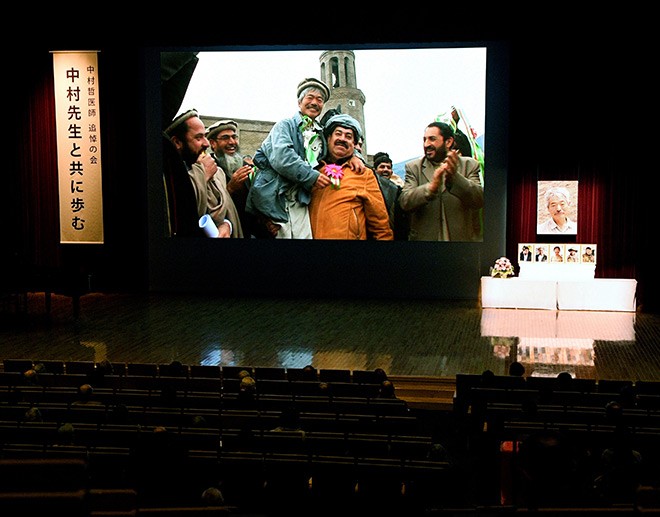 A video looking back on the achievements of Tetsu Nakamura, a doctor long involved in relief activities in Afghanistan, is shown at his memorial on Nov. 23 at Kyushu University’s lecture hall in Fukuoka. (Motoki Nagasawa)

FUKUOKA--Hundreds turned out at a memorial to pay their respects to the late Tetsu Nakamura, the renowned humanitarian physician who dedicated his life to improving the lives of struggling people in Afghanistan.

Some 450 people attended the event on Nov. 23 held at his alma mater, Kyushu University, in the city’s Nishi Ward, to celebrate his life and decades of aid work just ahead of the first anniversary of his death.

Nakamura, who was the local head of Peshawar-kai, a nongovernmental organization he established in his hometown of Fukuoka, was gunned down while doing humanitarian work in the war-torn country on Dec. 4, 2019. He was 73.

Portraits of Nakamura, an Afghan driver and four security guards who were all killed in the ambush were displayed at the venue.

Speaking at the event, his son, Ken Nakamura, 37, touched on the importance of having “peace that allows us to have three meals a day and live with our families.” He said "we take it for granted,” which was something his father always told him.

“I hope the activities of Peshawar-kai, which follows in my father’s footsteps, will help bring the peace that we enjoy to Afghanistan,” he said.

The president of Peshawar-kai, Masaru Murakami, 71, said in his memorial address that the organization has continued to provide support for medical care, irrigation and agriculture in Afghanistan.

He said the group will continue working to fulfill Nakamura’s wishes, even despite the various new challenges complicating aid efforts there, such as the COVID-19 pandemic and flooding.

Peshawar-kai organized the event, which was also streamed online.

Afghan President Ashraf Ghani said in a video message shown during the memorial that Nakamura’s “great legacy will be forever engraved in our hearts for generations,” referring to his achievements of building irrigation canals and revitalizing agricultural communities.

Singer-songwriter Masashi Sada attended the memorial and performed “Hitotsubu no Mugi--Moment--” (A grain of wheat), a song he made to honor Nakamura.

“Nakamura gave his life for a country that is not his own without hesitation and stayed calm without straining himself too much,” Sada said during his address. “That is what real courage is.”

Nakamura began offering medical support in Peshawar in northern Pakistan in 1984. After a severe drought struck Afghanistan in 2000 and turned local farmland into desert, he expanded his aid project to help rebuild Afghan irrigation and agriculture.

Since 2003, the organization has irrigated some 16,500 hectares of local farmland, reviving soil fertility and supporting the lives of 650,000 farmers.