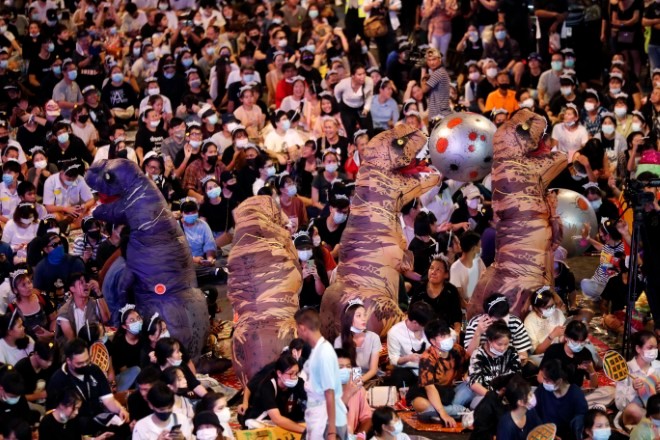 People in dinosaur costumes are surrounded by a crowd at a student rally Saturday, Nov. 21, in Bangkok. (AP Photo)

BANGKOK--Thai police will deploy nearly 6,000 officers on Wednesday for a demonstration at the office that manages the royal fortune by protesters demanding that King Maha Vajiralongkorn give up personal control of the assets.

Police said on Tuesday that no protesters would be allowed within 150 meters of the Crown Property Bureau, where royalists have also said they plan to gather in defense of a monarchy that faces its biggest challenge in decades.

Piya Tavichai, the deputy head of Bangkok police, said the two groups would be kept apart.

“Depending on how protesters behave, we will take appropriate measures,” he told a news conference.

More than 50 people were hurt last week when police used water cannon and teargas against thousands of protesters at parliament in the most violent day of more than four months of demonstrations.

Protesters seek the removal of former junta leader and now Prime Minister Prayuth Chan-ocha and want a new constitution but have also broken taboos by demanding reforms to curb the powers of the king.

Among protesters’ demands is the reversal of changes that gave the king personal control over a royal fortune valued in the tens of billions of dollars.

The FreeYouth protest group said in a Twitter post that they would demonstrate on Wednesday to “reclaim the property that is meant to belong to the people.”

The Royal Palace has made no comment since the protests began, although the king said the protesters were loved “all the same” when asked for comment on the demonstrations.

Prayuth has rejected protesters’ calls to resign and said last week that all laws would be used against protesters who break them--raising concerns among activists that this includes royal insult laws which have not been used since 2018.