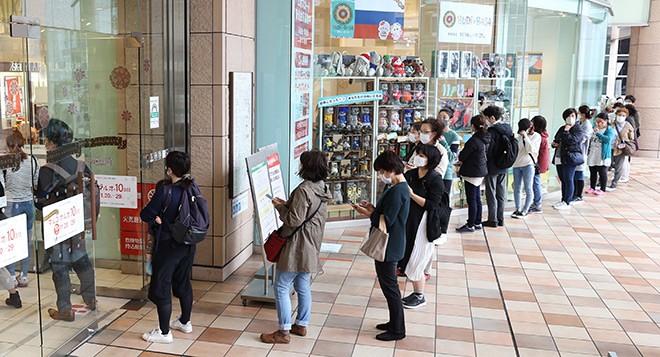 People line up to get "Go To Eat" campaign coupons in Tokyo's Adachi Ward on Nov. 20. (Wataru Sekita)

The number of serious COVID-19 cases soared to 51 in Tokyo on Nov. 24, the most since late May and 10 higher than the day before, metropolitan health officials said.

That marked the most seriously ill patients since a state of emergency over the pandemic was lifted for the capital in late May.

Serious cases refer to patients requiring ventilators or on extracorporeal membrane oxygenation (ECMO) lung bypass machines, based on the metropolitan government’s own criteria.

The metropolitan government also said 11 patients who initially tested positive over four days earlier this month were later confirmed free of the virus in  additional testing or due to errors in diagnosis.