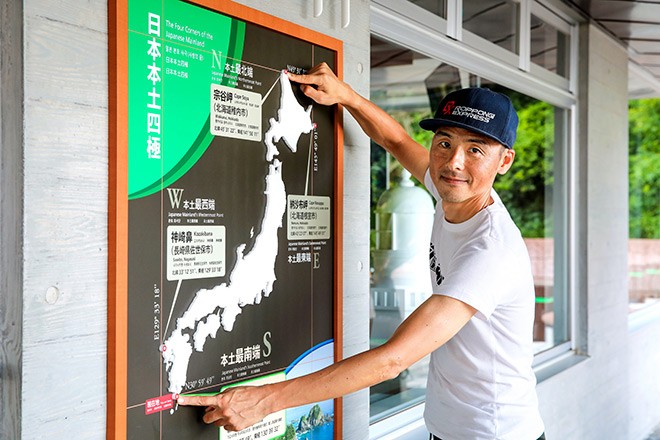 Akihiro Takaoka points out the starting and finishing points of his record-setting journey across Japan on Aug. 4. (Provided by Rx Bike and Kei Tsuji)

A man who abandoned his investment banking career to pursue his bicycle “hobby” entered Guinness World Records by cycling 2,600 kilometers across Japan in six days, 13 hours and 28 minutes.

Akihiro Takaoka, 43, started the journey at Cape Sata, Kagoshima Prefecture, on Aug. 5 and finished at Cape Soya, Hokkaido, on Aug. 11.

“I feel full of accomplishment and relief,” he said when he reached the goal.

He broke the previous cycling record for that distance by 30 hours and nine minutes. His feat was recognized by Guinness World Records in late October.

He had to travel by foot in the undersea Kanmon tunnel between Fukuoka and Yamaguchi prefectures and used a ferry to cross the Tsugaru Strait between Aomori Prefecture and Hokkaido.

He said sleep deprivation was the toughest problem he faced.

Takaoka planned to pedal 16 hours every day to cover 400 km, but bad weather disrupted that schedule. So he reduced his sleeping time to make up for the lost time on the road.

Originally from Kanagawa Prefecture, Takaoka bought his first road bike with his pocket money when he was in junior high school. He was obsessed with bicycle races where tactics decide the winners.

When he was a student at Keio University, he won an intercollegiate cycling competition. But he later quit racing and joined U.S. securities firm Goldman Sachs & Co. in 2001. His job was selling derivatives to investors.

However, in 2006, he started retraining because he “was concerned about his weight gain.” Even on weekdays, he rode his bike for an hour in the morning.

He later won the Tour de Okinawa, one of the highest-level citizen races in Japan, six times. He became known as “the strongest hobby racer.”

Takaoka said he decided to try to break the world record because major bicycle races had been canceled in Japan and abroad because of the novel coronavirus pandemic.

“You can set your goal by yourselves,” he said.