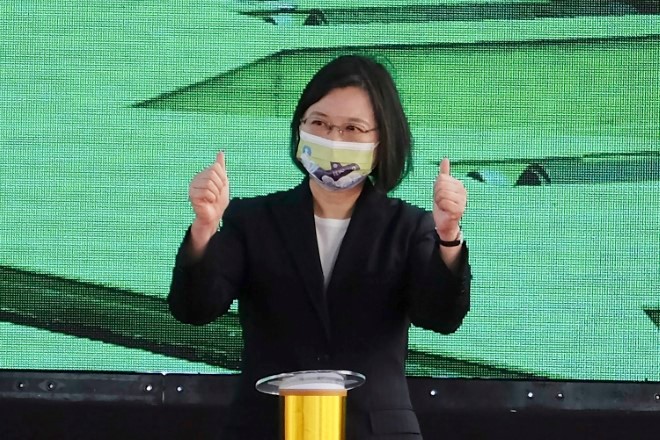 Taiwan's President Tsai Ing-wen gestures during a ceremony to inaugurate the production of domestically made submarines at CSBC Corp.’s shipyards in the southern city of Kaohsiung, Taiwan, on Nov. 24. (AP Photo)

BEIJING--China is considering drawing up a blacklist of “diehard” supporters of Taiwan’s independence, the government said on Wednesday, which may see Beijing try to take legal steps against democratically elected President Tsai Ing-wen.

China claims self-governing Taiwan as its own territory. Taiwan’s government says the island is already an independent country called the Republic of China, its formal name, although China rejects this position.

Zhu Fenglian, a spokeswoman for China’s Taiwan Affairs Office, said the “list of diehard Taiwan secessionists” now under consideration was only aimed at a very small number of independence supporters and those who fund them.

“It is absolutely not aimed at the vast majority of Taiwan compatriots,” she told a regular news briefing in Beijing.

Zhu did not give details or a timeframe, saying only that Beijing would take “targeted steps to severely punish in accordance with the law” those it viewed as hard-core backers of independence.

Chinese media have said the 2005 Anti-Secession Law, which mandates the use of force if China judges Taiwan to have declared independence, as well as national security legislation, could be used to charge those on the list.

It is unclear how that would play out, as Chinese courts have no jurisdiction in Taiwan, and Taiwan’s government leaders do not visit China.

Separately, Zhu said a Chinese court this week sentenced a Taiwanese citizen to four years in prison for espionage.

Last month, Chinese state television ran a series of programs featuring “confessions” by Taiwanese spies, which Taiwan described as entrapment and another reason for people to fear visiting China.