Abe’s side paid 9.16 million yen for banquets over 5 years 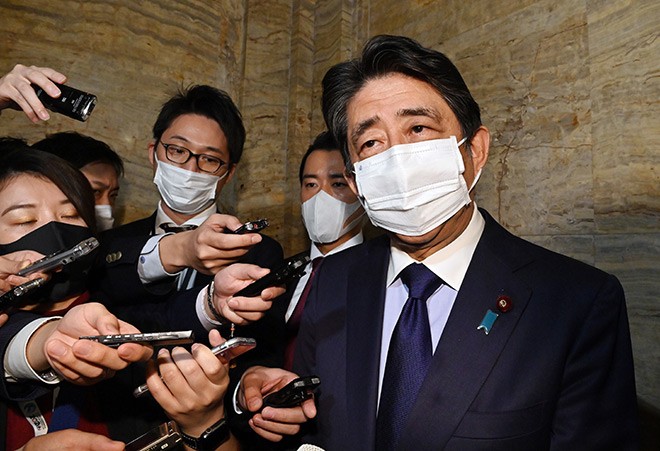 The sources said Abe’s side, in fact, paid a total of 9.16 million yen ($88,076) over five years through 2019 to cover the shortfall between the cost of the dinner parties and the fees the participants were charged.

The hotels issued receipts for such payments that were addressed to Shinwakai, the fund managing organization presided by Abe, they added.

The special investigation squad at the Tokyo District Public Prosecutors Office is looking into possible violations of the Political Fund Control Law because Shinwakai never listed the payments to the hotels in its publicly released income and expenditure reports on political funds.

Officials close to Abe acknowledged in interviews with the media on Nov. 24 that Shinwakai had indeed paid part of the banquet costs each year.

Aides in charge of compiling the political fund reports “were aware that they should have listed the payments,” according to the officials.

As for why they had not done so, the officials said the aides were following the precedent of not listing the expenses for the first banquet in 2013.

However, the officials said the aides had given Abe an “untruthful account” of the situation last year before he was questioned about the matter in the Diet.

They added that the aides informed Abe of the payments for the first time on Nov. 23, when news broke that prosecutors had questioned his aides on a voluntary basis. The aides gave the same explanation to investigators, according to the sources.

The banquets were held for Abe’s supporters from his constituency in Yamaguchi Prefecture at either Hotel New Otani or the ANA InterContinental Tokyo between 2013 and 2019.

They were hosted by his support group, headed by Abe’s chief government-paid aide. The events took place the night before the prime minister hosted tax-funded cherry blossom viewing parties in the capital.

Each banquet guest was charged 5,000 yen, a rate well below the normal prices set by the exclusive hotels.

The total cost of each dinner party varied from about 4.07 million yen to around 6.34 million yen between 2015 and 2019, the period that remains within the limit of the statute of limitations under the Political Fund Control Law.

The number of participants at the banquets ranged from 450 to 750 over those years, and they paid about 2.29 million yen to around 3.84 million yen in fees for each event.

The difference between the cost of the dinner parties and the participant fees ranged from about 1.45 million yen to about 2.51 million yen.

Investigators have interviewed the state-paid aide and officials with Abe’s support group on multiple occasions, based on the hotel receipts, detailed statements and other records, according to the sources.

They are trying to determine why Abe’s side covered the disparity, where funds came from and whether the failure to report the expenses violated the law.

The investigation followed a criminal complaint filed by a group of lawyers and scholars in May against Abe and two of his senior aides. The group says payments covering the difference could also constitute an endowment to voters in Abe’s constituency, an act banned under the Public Offices Election Law.

Abe has repeatedly denied payments were made by his side during Diet deliberations and elsewhere.

“Guests paid the price set by the hotel, which apparently took into account that most of the participants stayed overnight there,” he said, referring to the “too low” participation fee.

He has also insisted that there was no need to list the cost of the events in Shinwakai’s reports because no money was earned or spent by his office and support group in connection with the banquets.

As for detailed statements concerning the banquets, Abe has said such statements were not issued by the hotels.

Abe, who announced his resignation as prime minister in late August after nearly eight years in office, declined to comment on the investigation on Nov. 24.